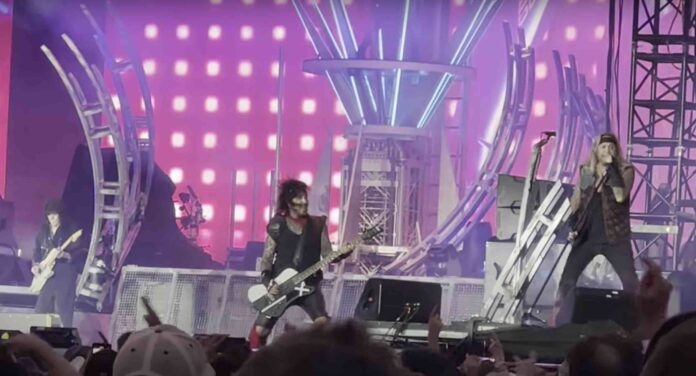 The venue said, “The Stadium Tour has been paused due to severe weather in the area. Please take cover under the concourse as storms are approaching. We are monitoring the situation and will update you as soon as information becomes available.”

Wish we were given better information. Nats staffers said the weather has to be clear for 45 minutes and that DC has 11pm noise ordinance deadline. Motley won’t be on tonight you can go home is what the staffers @nationalspark told us. Come to find out Motley Crue did perform. 🥵

Agreed, was told the show was done and hung around for nearly an hour drinking the beer and eating, nothing was said that led anyone to thing it would continue because the weather had turned to absolute crap!

Fans are thrilled to witness Motley Crue back on stage. While tickets are in huge demand, the band bassist Nikki Sixx recently touched upon the subject of the people, asking the band for free tickets. He called them ‘bloodsuckers’ for trying to take advantage of him and the band.

Nikki Sixx has expressed his frustrations over the click baits and news items that demeans the band. However, Sixx’s complaint today is that although they will say bad things about the band on tour as well, they are requesting free tickets from them only to write pieces to drag them down.

Sixx called out these ‘bloodsuckers’ and complained about how they have been dragging them down all these years yet still have the courage to ask them for free tickets for the Stadium Tour. He also added that this tour might also give them something to write about. Regardless, the band will laugh at them like they did all these years. Sixx took to his Twitter account and sent out a Tweet which was apparently deleted.

Here are Sixx’s words about the press:

“The bloodsuckers are requesting tickets to the Stadium Tour after years of slagging us. Such a funny dance. They take shots; we laugh at them. Then they play nice; we still laugh at them. Maybe these next few shows, we should finally give them something to write about.”

Nikki Sixx often grabs the headlines with his controversial comments. He recently commented on the current state of rock and went on to argue that a lot of it is “extremely overproduced” and “ProTooled” to death nowadays.

Let us know your thoughts about the matter in the comment section below.