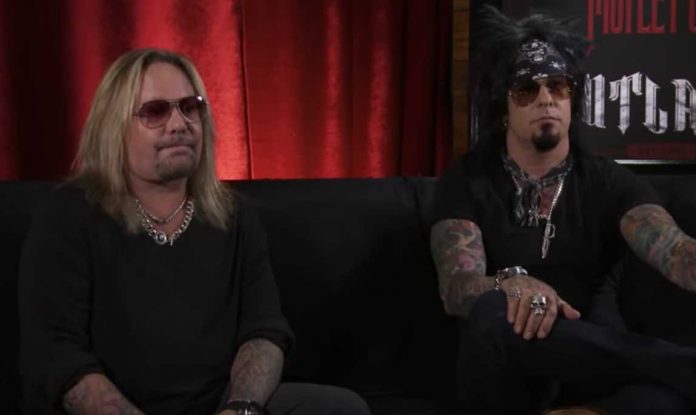 “So I remember Suzy called me. My grandmother said, ‘Frankie, your girlfriend is on the phone.’ So she said, ‘I have a present for you.’ I said, ‘Can you give me a hint?’ She said, ‘The initials are B.J.” So I was like, ‘What’s that?’ That’s really sad. I had no idea what it was.

She said, ‘Come to this house I’m babysitting tonight.’ So I went to the house, and she answered the door, the couple she was babysitting for, she went to the wife’s closet and put on her lingerie. There was nobody home but me, Suzy, and the sleeping baby, and that’s how I lost my virginity.”

Nikki Sixx also recently called out Steel Panther for mocking Vince Neil, and saying if they could bring back a singer from the dead, it would be him.

Sixx tweeted, “The singer in steal panther can go fück himself… wanna be band putting down Vince Neil ?” He added, “That’s why they are assholes. Backstabbers.”

Steel Panther drummer Stix Zadinia shot back, “Sounds like someone needs some fucking attention. Haha. In order to stab someone in the back, you have to have been somewhat cordial to begin with.” A Motley Crue icon revealed that he partied with an A-list star before his death recently.