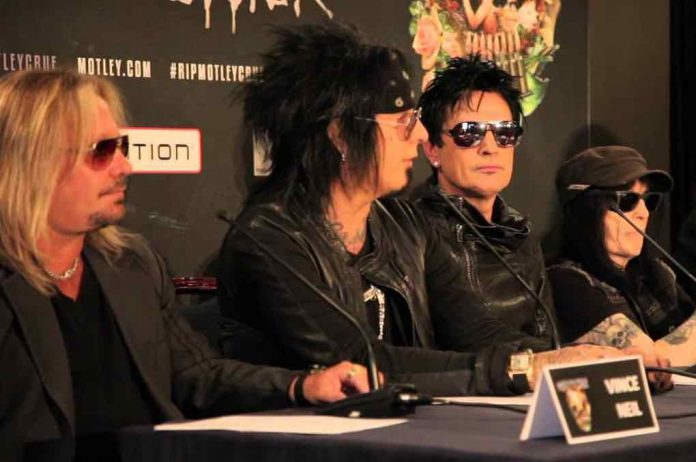 Motley Crue bassist Nikki Sixx described nobody showing up to the band’s first in store record signing for Too Fast For Love in a new ‘Worst Firsts’ podcast interview with Tommy Lee’s wife Brittany Furlan. Alternative Nation transcribed his comments. A Motley Crue member revealed yesterday how he hooked up with a babysitter.

“So the point of the radio station is we announced we were doing this in store, and that our album was coming out. So we went to wherever this record store was in Grass Valley, and I’m telling you, it’s only two blocks long. So we were there, and we had our vibe together, and we were waiting, and waiting.

A Motley Crue icon made a gross young actress remark last week. Sixx added, “So finally I looked over at Vince, he’s going through the AC/DC section, Tommy was going through the T-Rex section. We were just trying to act like we were customers, because no one showed up to our first in store. We were like oh wow, we really don’t have a shot, do we? No record company will sign us, we release our record, and no one shows up. But back in Los Angeles, it was different, and we sold 40,000 copies of that record and that’s what started our career.”

“Once that album hit, everything changed, and it changed the energy of the band too. We weren’t struggling to go uphill, we were going uphill, but we could see it now. Before that it was roadblock after roadblock after roadblock, and we would play, and more people were showing up, but once that album came out, it was really magical.” A Motley Crue icon recently revealed how he was nearly killed in an accident.