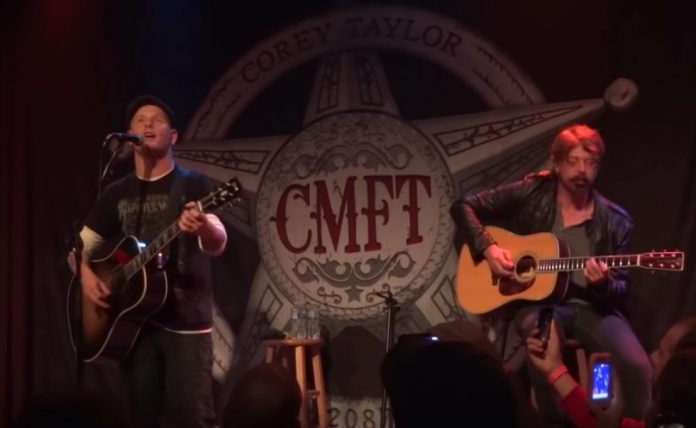 The well-known frontman of Slipknot and Stone Sour, Corey Taylor’s beloved son, Griffin Parker Taylor shared a new story and hammered the people who call him a bad slur and criticize the LGBTQ community on his official Instagram page. Slipknot singer Corey Taylor ‘freaked out’ at a big name recently. Griffin slammed people who harass him by ripping his dad.

Fans of Slipknot discussed the song “Only One” off the band’s 1999 self-titled solo album and it’s legacy in a new topic within the group’s subreddit.

SlitThroatCutCreator wrote: “That grunt before he says, ”death is mine, give me mine” gets me every time. His scream that goes along with it kills. I love when that riff changes too when he says, ”I can only die over time.” That intro is sick as hell and that drum solo is insane. I’d like to hear how Jay plays that. At the end as they scream the chorus it sounds like an apocalypse.

If Corey rapped again like he did on that Tech N9ne track I bet it’d be a lot better this time coming around. I mean, Spit It Out and No Life have rapping in them too so I think this fits in pretty well on the album. One of my top favorites from them and probably my favorite on this album. PAIN, MADE TO ORDER! is one of the best lyrics ever. Corey coming for that ass.”

Although I do like it, I prefer the Crowz demo with the funk intro and Corey on vocals. But lyrically I like the album version more. I don’t know, for an “early” Slipknot song it sounds the most “slapped together for the album” out of all the tracks.”

Ciilk said: “Updated version of the MFKR demo. This version is much better, but it’s still kind of a “meh” song to me. I always thought the first line was “Brain! Mighty warrior!”

This song has one of the best screams Corey has ever done; 0:51 – “Silence for my revelry!” is a scream that he hardly ever does, and it reminds me of Solway Firth. The entire section of that song started at that line kicks so much ass. The song doesn’t look to have been played live very often, even in the self-titled era. I don’t think it was played at all throughout Iowa and Vol. 3, and the last time it was played was during the AHIG / reunion shows. I’m surprised it made a live appearance after self-titled though. It just sounds like a song that doesn’t fit very well live to me.” This Slipknot member confirmed the real reason for his departure a couple of days ago.