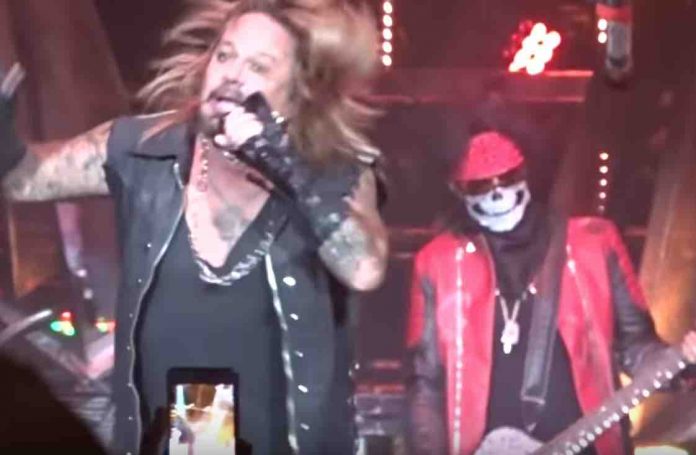 Vince Neil of Motley Crue is looking great via a recent photo that his girlfriend have taken of the two which looks to be on New Year’s Eve. The singer faced a lot of backlash over the past couple of years due to issues on stage with his vocals and many took to body shaming the legendary vocalist as well.

Vince Neil has never truly spoken directly on the backlash, but surely it has taken blows to him which can cause many mental issues for someone if they don’t take the proper steps to bettering themselves mentally and physically.

None-the-less, Vince Neil has seemingly taken steps to better himself physically on his own accord and wanting to do so. As previously stated, Vince’s girlfriend, Rain Hannah took a photo of the two out at New Year’s Eve. Unfortunately, there’s no indication on where they were for their outing, but they both are looking great as they both smiled very widely for the camera.

In this photo, it’s great to see Vince looking happy as he has had a rough time over the past few years. Vince looks relaxed and better than ever as he is shaven up, wearing all white, and looks like he has been taking care of himself both mentally and physically as he rings in the new year with those who he cares about most.

Now, this could lead to a reunion as there have already been echoes of a possible Motley Crue tour coming up, or just a string of shows. This would be great for Vince and the band as Vince Neil and company deserved to retire on a much higher note than fan footage painted them out to be on their final tour that we saw so much over just a few years ago.