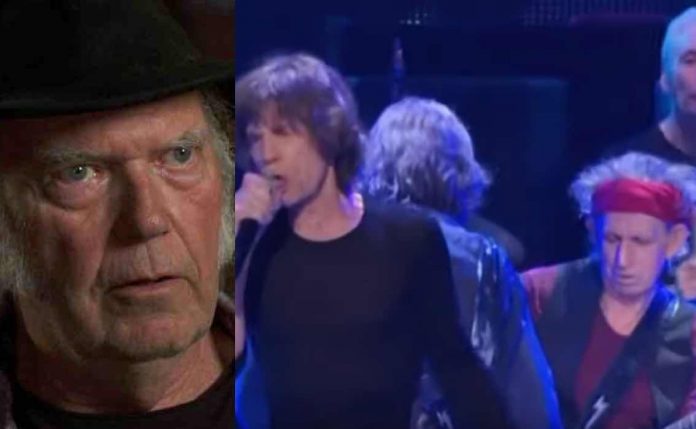 A fan asked, “Hi Neil, I was just listening to Mansion on the Hill and I wondered if you ever get sad like I do about how great the music culture used to be, all those great bands, the records spinning? Times were perfect for music, it was the perfect day when a new Stones record came out. Listening to music was a community thing, now it’s almost always just on headphones. Why do cultures devolve, it’s a real shame.

I had 2 other questions. How close did you actually come to touring with Keith (New Barbarians)? And was it as fun as it looked playing with Page and Plant? Thanks, hugest fan always (named my son after you), Scott.”

Young responded, “Scott, (my dad’s name). Not close enough to touring. Was Ronnie’s idea. Good one that got away. Playing with Keith! Wow. That would have been good. Can’t answer the other questions. . . . only ask them . . . .love Neil.”

Another fan asked, “Hi Neil, you wrote two books yourself. Are you aware there’s a really great book by German /Iran-based writer Navid Kermani out titled ‘The book of those killed by Neil Young’?

It’s a fantastic read about your music and how it affects people. Especially when he describes the soothing impact of, I believe, ‘The Last Trip To Tulsa’ on his sick baby daughter. Amazing writer.
Don’t know if it is available in English, but I’d like to know what you’d think about it.
See you and the boys next week in Berlin, probably for the 20th time or so, all the best & keep on rocking!

See Elliot at the great gig in the sky, met the man in Frankfurt in 2003 during the intermission of your stunning Greendale acoustic show, what a nice and friendly guy he was, he will certainly be missed! Tom from Germany.”

Neil shot back, “Tom, Wow, I have never seen that book. Sounds like a good read for me. See you and Elliot in Berlin. ny.” Neil Young recently discussed Bruce Springsteen fan disrespect.