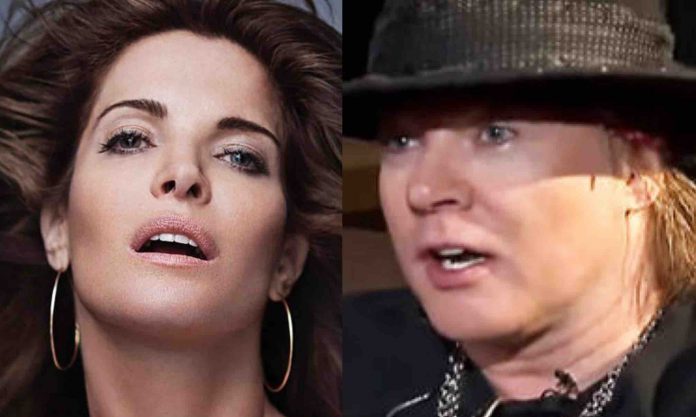 Guns N’ Roses frontman Axl Rose‘s ex-wife Stephanie Seymour recently posted a throwback photo of herself swimming in a pool, and a more recent photo of herself in a swimsuit. Axl Rose’s ex-wife recently leaked a ‘cowgirl’ outfit photo.

Nickyno posted on Reddit recently about a Guns N’ Roses album released just a couple of years after Axl Rose and Stephanie Seymour’s relationship ended, The Spaghetti Incident, “It’s there. I’m glad it wasn’t branded as an UYI album. The production is all over, some of it sounds like trash. A few covers sound half assed and turned up to 11.

The song selection is killer though, as are Duff’s songs. When this album shines it absolutely showcases what made the UYI Gunners top notch. If that lineup had a future, Ain’t It Fun was a perfect song to put out and sound…modern? For the grunge era.

All in all though, there’s some stinkers on there and I think it’s remembered correctly . It’s nice to have as a B-sides album and fill out the band’s discography, but it’s far from essential.”

Your_actual_life commented, “I accidentally automatically received it as a Columbia House CD of the month album when I forgot to return my monthly membership card. I was a few years out of my GNR phase. Usually when that happened, I’d just mail them back, but this time I lost it in my room and ended up paying like $20 to Columbia House. Found it years later and sold it without ever listening to it. God, I wish I HAD. Would have been an introduction to some great tunes in my prime teenage years.”

Weirdmountain responded, “It’s decent. Seeing as how it’s the last batch of studio recordings before a 14-year gap, I’d like to see a follow-up to segue back into the current-era Guns making a new studio album, with a new collection of studio covers, including Black Hole Sun, Wichita Lineman, and a few more. Call it The Lasagna Occurence. Hahaha.” An AC/DC member recently unloaded on a vicious Axl Rose insult.