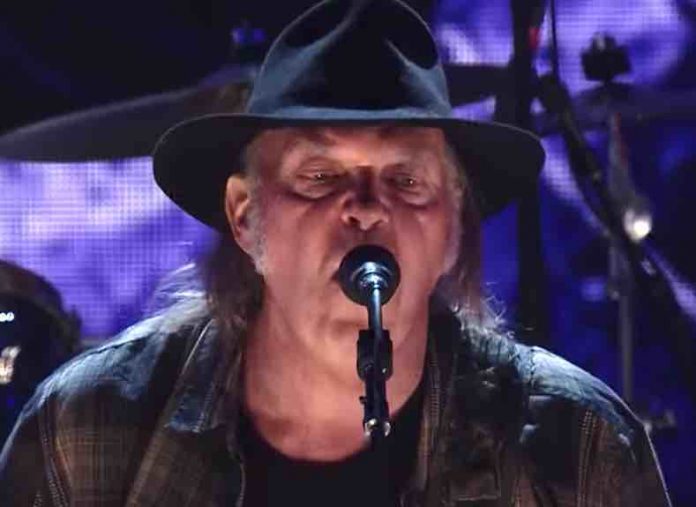 Neil Young had previously directed Spotify to delete his music from the streaming service due to their association with the long-tenured UFC commentator Joe Rogan. Young has backtracked since then, deleting his letter, and seemingly giving up his battle over Rogan. He was trolled for that move. Previously, Trevor Noah also reflected on the incident.

The former POTUS Donald Trump’s son Donald Trump Jr. recently took to his Twitter account and noted the controversy. He said that Young might not own his music portfolio anymore after he talked about the letter withdrawal. He also shared a picture featuring the musician which was snapped at Trump’s office a decade back.

Trump captioned: “So Neil Young pulled his letter to Spotify because it seems he doesn’t even own his music portfolio anymore & therefore has no control. That checks out because he was in our offices a decade ago trying to sell it. We passed! I know because I think I took this pic in DJTs office!”

So Neil Young pulled his letter to Spotify because it seems he doesn’t even own his music portfolio anymore & therefore has no control. That checks out because he was in our offices a decade ago trying to sell it. We passed! I know because I think I took this pic in DJTs office! pic.twitter.com/2cwYng8q0L

Addressing his management team at LookoutManagement and Warner Bros, Young wrote: “Please immediately inform Spotify that I am actively canceling all my music availability on Spotify as soon as possible.” I am doing this because Spotify is spreading false information about vaccines – potentially causing death to those who believe the disinformation being spread by them,” he wrote.

Young deleted his letter on his website after giving Spotify an ultimatum to remove Joe Rogan or remove his music. Previously, Rogan had discouraged young people from getting vaccinated. Rogan was also previously involved in a controversy as he had promoted the concept of taking deworming medication Ivermectin to treat the virus, without providing any medical evidence supporting it.

“The View” host Joy Behar on the ABC daytime talk show spoke about the matter. Behar stressed that Rogan is “a horror” because of his COVID beliefs, but she cited the First Amendment and said that doesn’t mean Spotify should dump him. Instead, she called on people to boycott Spotify or not tune into Rogan’s show as an act of protest if they don’t agree with Rogan.

“The way to counter that speech is with more speech,” Behar said. “The way to counter it is with boycotts.” Behar also praised Young for threatening to remove his music from Spotify in protest of Rogan. Spotify has since confirmed to Variety that it is in the process of taking Young’s music off the platform. “Maybe other musicians will follow suit, and that would be legitimate,” Behar said. “It’s not a cancel culture, it’s a consequence culture. And the way we handle it is we don’t buy Spotify. We ignore Spotify.”