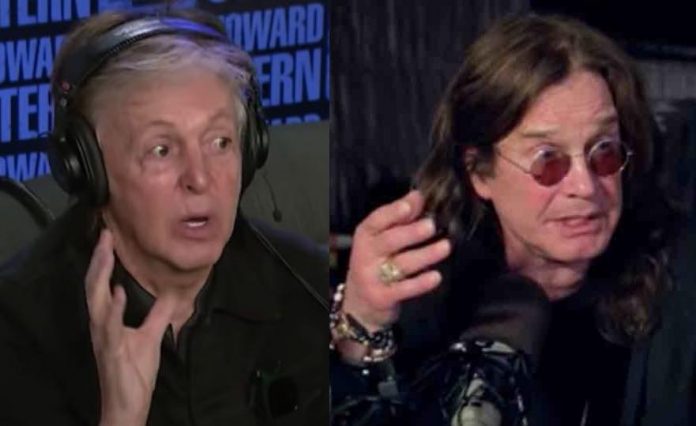 Ozzy Osbourne called Black Sabbath’s “Paranoid” his ‘anthem’ in a new interview, and revealed what The Beatles icon Paul McCartney (whose daughter was spotted with Ringo Starr) did to his wife Sharon.

“I went to school with Tony Iommi from Black Sabbath; I wasn’t friendly with him in school, though we became mates. Black Sabbath is a band with local guys that had a dream, and it all came true. I remember when Roger Bain, the producer [of ‘Paranoid], said, ‘Just jam something out, we need it to finish the album.’ We just jammed and ‘Paranoid’ came out, and it was a hit single.

People would say, ‘That ‘Paranoid’ is great, it’s gonna be huge.’ When you’re in the bubble looking out, it’s a completely different view than from outside the bubble looking in. I mean, I’d become in my own way a Beatle, you know? “When I met Paul McCartney, I couldn’t believe it. I would do a thing on a TV show, my wife and I and the kids, and he was on the show, and I said to Sharon, ‘Alright Sharon, did you ever think that you would be standing on the same stage as Paul McCartney?’, and she was just, like, ‘Wow.'”

Ozzy recently mocked Ghost. He added, “It’s a simple song with an effective rhythm. It’s got its own color, it’s got its own vibe. I like to think that people in the years to come will still get enjoyment out of it. Every now and then you get a song from nowhere, it’s a gift – that was one of them songs that came out of nowhere, the biggest hit earlier on. It was the first time that I had a Top 10 single, apart from ‘Changes’ with my daughter Kelly.

It’s one of those songs, it stands around the time. And I hope people in the future get as much enjoyment as people now get it. When I first departed from Sabbath [in the late ’70s], I said, ‘I’m not gonna do any more Sabbath.’ And then the kids were going, ‘We want to hear this one, ‘Iron Man,’ ‘War Pigs,’ ‘Paranoid’…’ And then I thought, ‘Why not?’. Every night, I’ll do that song somewhere in my show. It’s one of those songs that I can’t get away from, it’s still as much fun to play now as it was back then. It’s a good song.”

An Ozzy Osbourne alcohol and drug ‘raid’ was recently detailed. Ozzy Osbourne will release his “See You On The Other Side” box set in November.

It is 173 songs total on 16 albums on vinyl, each of which is 150-gram, hand-pressed multi-colored splatter vinyl, making each pressing unique. Many of the albums are previously unavailable or are currently out of print on vinyl. The collection also includes “Flippin’ The B Side”, a new collection of non-album tracks, which has never been pressed to vinyl. In addition, “Black Rain”, “Down To Earth” and “Scream” have never been pressed in the U.S., while “No More Tears” was remastered from the original flat analog album masters and is offered as a two-LP set which will allow the album’s songs to be uncompressed for the very first time ever on vinyl.

“This one’s the most elaborate collection so far. It’s very well thought-out and well put together. It’s got everything in there that you possibly could want and some surprises along the way. The sound of a vinyl record is different, and I do believe that vinyl sounds better.” Ultimate-Guitar transcribed his remarks.