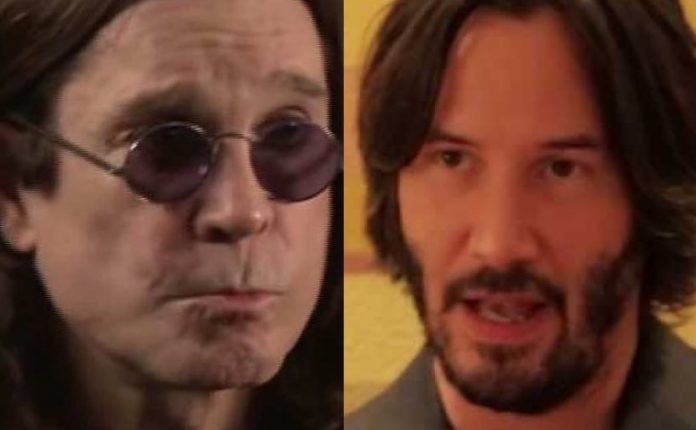 Former Black Sabbath frontman Ozzy Osbourne‘s wife Sharon Osbourne discussed how Keanu Reeves agreed to do an interview with her when discussing her favorite moments hosting the CBS show ‘The Talk’ during an appearance on The Kelly Clarkson Show earlier this week. Alternative Nation transcribed her comments about her favorite moments. Ozzy Osbourne mocked his wife’s appearance yesterday.

Sharon said, “Well, favorite people, I know my favorite people that I’ve been allowed to interview are Elton John and Keanu Reeves. He’s just the best, I love him. For a laugh, he’ll do anything. He’s so open.”

She then discussed her worst moments, “They used to get me to do cooking segments, and I have false nails, and I would roll things up into a burger, and there would be a couple of nails in the burger, and I’m like, they’ll never see it. Wolfgang [Puck] didn’t really like that.”

She also discussed losing a tooth on air, “Then I sat talking on the show, and I’m like, there’s something going on in my mouth, and my tooth fell out. Just as I sat talking, it fell out.

It was in my hand, then the guy that runs our show comes up to me during the break and says, ‘Grab some superglue, put it back in.’ It didn’t stick. It says it sticks anything, but it doesn’t stick teeth!” Ozzy Osbourne reacted to tragic Elton John news a few days ago.