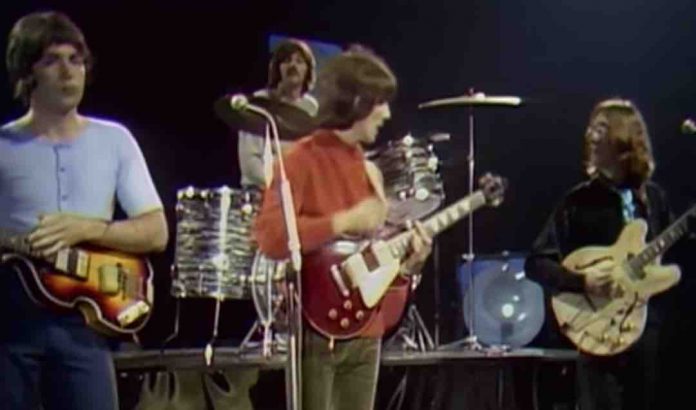 Paul McCartney and The Beatles drummer Ringo Starr has confirmed that something of a “The Beatles reunion” is in the works. At least in spirit. GQ.com asked the legendary drummer about Ringo’s upcoming album “What’s My Name”, which will have former The Beatles bassist Paul McCartney guesting on bass on one of the tracks entitled “Grow Old With Me.” – A song which was written by icon vocalist for The Beatles, John Lennon. This brutal Paul McCartney rejection about Elton John was recently revealed.

“I did the vocals first and then I wanted real friends to come and play with me. I thought the only guy who could really play bass on this for me was Paul. And Paul happened to be coming into town. I said, “I’ve done this song I just found and I’d love for you to play bass.” He said, “Sure, okay.” And that’s how I got Paul: I asked him and he said yes. He is the most melodic player, I love playing with him. He played beautifully and then he sang with me, that was nice too. (But) he’s been on five or six on my albums, so it’s not like the only time he’s ever played with me.”

John Lennon’s widow was spotted with Ringo Starr. Fans of The Beatles discussed which of the fab four’s signature albums should get the “deluxe edition treatment” next in a new topic on the band’s subreddit.

Flippikat put: “I’m thinking of a comprehensive Singles/EPs collection that serves as a companion to the albums, coving ALL the non-album tracks – A and B sides, like “Past Masters” did. Then you could have great B-sides like Rain in the tracklist (which only appeared in the DVD for One, not the CD), and maybe even the UK Magical Mystery Tour double-EP. (It makes sense if Strawberry Fields Forever/Penny Lane and All You Need is Love/Baby You’re a Rich Man are in the collection as singles). Add in some bonus tracks of alt mixes, or different takes of those singles and it’ll be a winner.”
Paul McCartney was revealed to be ‘Falling Over’ On this drug. Rubbersoulyouneed wrote: “What’s even more frustrating is that all of MMT has already been remixed, (Side 1 for the DVD and Blu-ray in 2012, almost all of Side 2 for 1+ and Sgt. Pepper Deluxe, and Baby You’re A Rich Man on the Yellow Submarine Soundtrack) so they have already done it, but for whatever reason they haven’t released the standalone mixes for Side 1 outside of the movie yet”