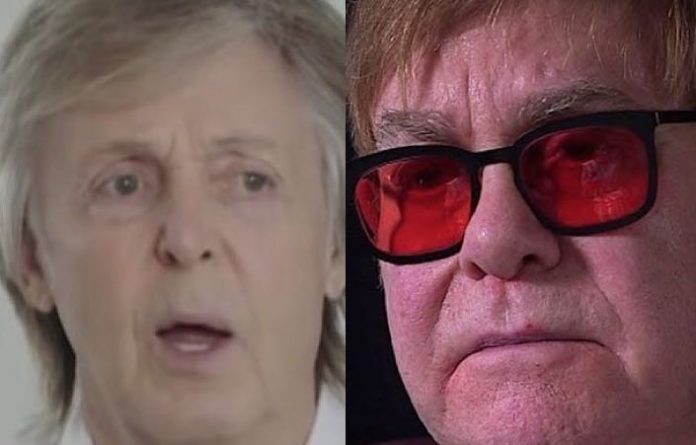 Paul McCartney had a difficult situation with Elton John! John Lennon’s widow told Elton John, “It’s Your Song!”. According to John’s new tell-all autobiography entitled, “Me” which was was released this week Yoko Ono told the iconic performer to finish a bunch of John Lennon’s songs following his murder in December of 1980. Elton John shared this ‘gross’ kiss with Eddie Vedder recently. As the story goes, Yoko Ono found a bunch of songs that Elton had previously recorded demos of and wanted the Rocketman to finish them off – instead of Lennon’s right-hand man, Paul McCartney. Elton John ‘threatened’ by boyfriend with Freddie Mercury.

John said no to the offer as he elaborates in his memoir.

Elton writes “I thought it was too soon, the time wasn’t right. Actually I didn’t think the time would ever be right. Just the thought of it freaked me out…I thought it was horrible. Yoko was insistent, but so was I. So it was a very uncomfortable meeting.”

The reviews are in for Elton John’s new hit memoir entitled “Me” and the Rocketman’s fans are singing it’s praises. Taking to Elton’s official Facebook page, they gave their thoughts regarding his new autobiography.

Cindi wrote: ” Such a great book. I’ve got it on my kindle. Learning his grandmother was born in a workhouse, was very unsettling to me as we toured one in Portumna, Ireland. Such a horrific time for those people .”

Susan said: “Love you! Can’t wait to learn what you want me to know about you… me, named a child after you. You held me through 14, 15, 16, and I find you all through my life. You held my hand when my Princess died, while you cried your own tears. You are teaching me now like only a big brother could. I don’t ever want to think of a world without you so you better never go away…please Sir, stay as healthy as you can!! You are family to me.”

Sylvia replied: “Can’t wait to get a copy. You have done a fair bit of releasing emotions lately. Great to see such honesty. A real man, husband, and father. Wish you much happiness in your future. You have bought a great deal of happiness to so many. Been following you since we were both about 17. Long-time Elton.”

Amy proclaimed: “Very, very excited to see what you have to say…I saw your Vegas show and loved the storytelling, I’ve caught many interviews – you are smart, articulate and an incredibly funny storyteller. I love your music, but more so your take on life and experience. Thank you so much for being a gleaming, joyful thread in my life since my oldest brother played “Benny & The Jets” for me at 7 yrs-old.”