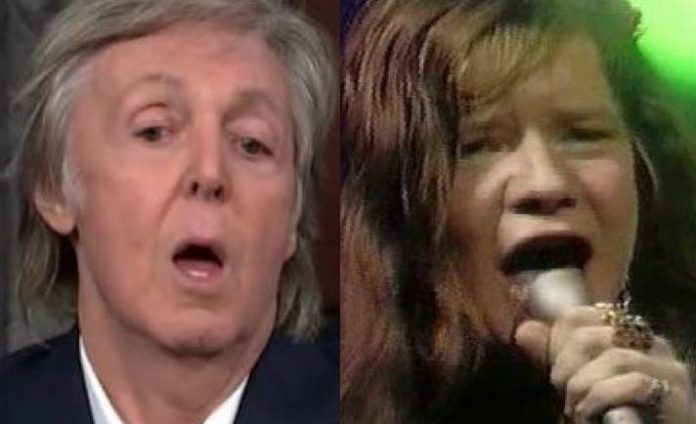 In sombering Janis Joplin news, the account for the late wife of the Beatles icon Paul McCartney, Linda McCartney posted this photograph of the deceased rock great.  The photo is from the historic Fillmore East which resided in New York, New York. The year of this photograph, which you can view below was from 1967. Howard Stern revealed this awful Janis Joplin remark last Summer.

In other news regarding Janis Joplin, music writer Holly-George Warren described the legacy of Janis in a recent interview promoting her latest biography on Joplin: “Janis: Her Life and Music” She told The Alcalde: “There has never been another Janis Joplin. She was not only a great technical singer, but she was able to tap deep into herself through her music. She was so incredibly emotional. There are so many people who saw her in ’66 who still remember it like it was yesterday. She wasn’t singing to them but for them. And she’s a role model. She was so ahead of the curve in her role in the music business as the first huge female rockstar. She was so fearless and willing to kick down any barriers to do what she needed to. She’s an inspiration to those who were afraid to be their true selves.“

Jimmy Page made this disturbing Janis Joplin revelation last year. She later continued, revealing what she was most surprised to learn about Joplin while writing about her: “I really bought her image, as having been a wild partier all the time. I discovered there was a studious side to her. She hid that she was a bookworm, but she always had a book on her. She also seemed to long for a traditional kind of life. Maybe it was a “grass is greener” kind of thing. But she wrote about wanting the white picket fence and husband. “