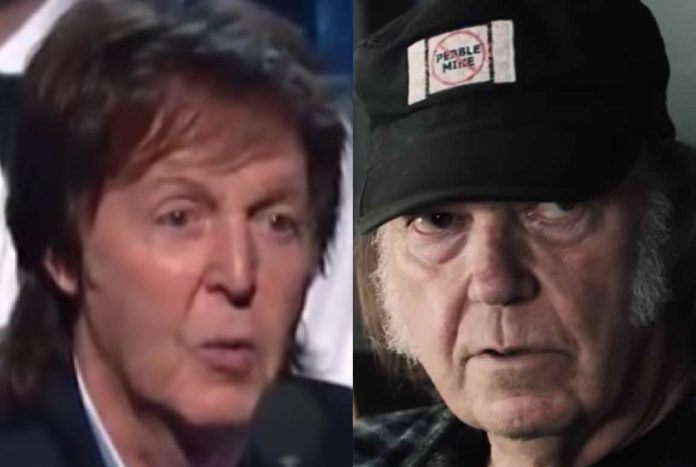 The official Instagram of Paul McCartney‘s late wife, Linda McCartney shared this stunning still photo of rock icon Neil Young that she snapped back in 1967 in Boston, as Young did a favor for her with one of her first major rock and roll shoots. You can view it below. Paul McCartney’s daughter was recently spotted ‘dating’ Drew Barrymore.

In other news regarding Paul McCartney and the Beatles, fans of the group took to social media via the official subreddit for the Beatles to debate whether or not the 1969 album Yellow Submarine can be considered an official album by the Beatles.

Howard Stern recently revealed a Paul McCartney hotel room demand. Rocket_Admin_Patrick wrote: “Not really, the ‘Yellow Submarine’ Songtrack from the late 90s is just ‘Yellow Submarine’ but better. All of the songs got stereo remixes too which helps as well. If it is an official album, it’s easily the least essential in their entire catalog. Just throw the four tracks in somewhere around when they were recorded (‘Only A Northern Song on Pepper’, ‘All Together Now’ and ‘It’s All Too Much’ on MMT [Magical Mystery Tour], ‘Hey Bulldog’ somewhere around ‘Lady Madonna’ and ‘The Inner Light’).

BlakePhoenix countered with: “Yes. It was compiled by The Beatles and George Martin as a Beatles release for both sides of the Atlantic. It has its own distinct tone and stands as a landmark in the Beatles’ journey. The sequencing of songs on Side One adds up to a Beatles statement. And Side Two (which really grows on you, keep listening!) features echoes of Beatles tunage. It’s an Official Beatles Soundtrack Album.”