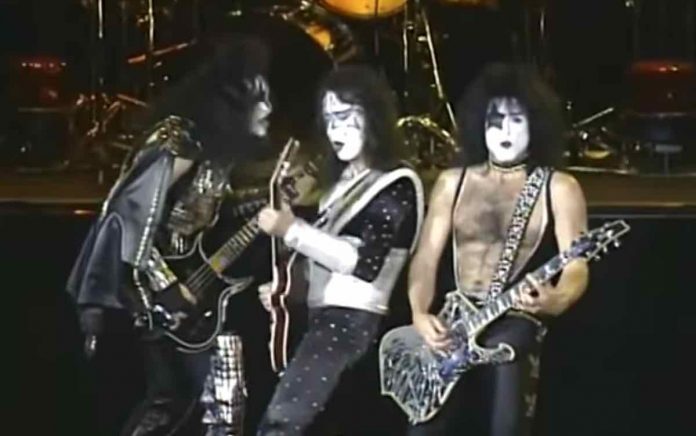 KISS frontman Paul Stanley was recently interviewed on the Blairing Out w/ Eric Blair show to discuss a variety of different topics. Here, Stanley discussed if ‘the hottest band in the land’ will have any special and big names appear during the group’s ‘End of the Road’ tour, how he manages family-life and life on the road, his ‘message of hope’ to KISS fans and more. Alternative Nation transcribed Stanley’s comments. KISS’ Paul Stanley stunned by sad ‘teen girl’ claim.

Blair: For the End of the Road tour, as it winds down, will KISS be bringing any guest stars on stage with them?

Paul Stanley: I have no idea, we are open to anything it just has to make sense and be done in the right spirit. So anything is possible.

Blair: Paul Stanley, you are a family man, how do you balance having a wonderful family and career like KISS?

Stanley: The most important thing in my life is my family. So as long as that is the core of what I’m doing I can make everything work around that. My children are the key to everything, my wife [as well]. So being a family man comes first and that’s the foundation of everything else.

Blair: What is the secret to you being the healthiest rock and roll icon in the history of music?

Blair: What is Paul Stanley’s message of hope to KISS fans?

Stanley: My message of hope to everybody is that it’s easy to find people that are going to tell you what’s impossible. It’s up to you to believe in what you want to do and to make it happen. People will tell you it’s impossible and they are always the people that fail. So I believe in you. Work hard, play hard and you’ll succeed. Paul Stanley recently leaked these bold texts from Gene Simmons wife.

In other news regarding Paul Stanley and KISS, fans recently took to the KISSFaq fan forum to discuss if anyone has decided to skip the ‘End of the Road’ tour and their reasoning behind that. One fellow forum member by the name of So Cruel stated: “I decided to skip the tour. Last time I saw Kiss was 2010. They were a shell of their former selves even then. Paul couldn’t sing and the band was just going through the motions. I went with a buddy who had never seen them before. After the show, he said he didn’t think they were very good. I told him he should have gone to the reunion shows. This KISS member calls out Paul Stanley after firing.