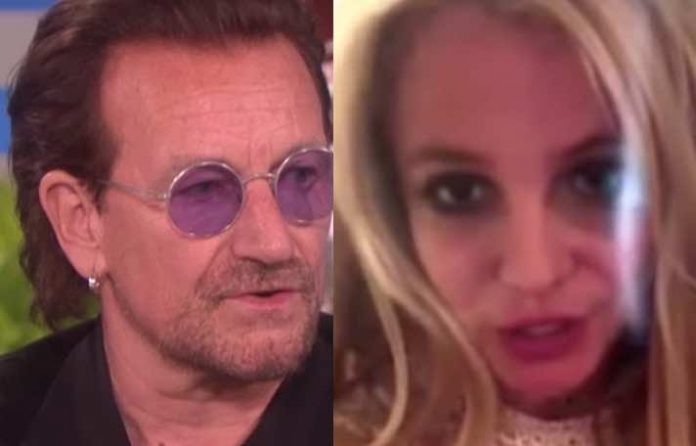 Notable U2 and Bono fan Twitter account, U2OughtaBeInPix recently posted this interesting piece of U2 history in light of this year’s Grammy award celebration. This picture in particular features the U2 frontman from the 2002 edition of the event, ‘bowing’ to pop diva Britney Spears and kissing her hand. You can view the photo below. Slash calls out Bono for terrible U2 performance.

In other news regarding Bono and U2, fans recently took to the subreddit for the group to discuss their first time seeing the band in concert and their takeaways from that particular show. ZOOTV83 proclaimed: “I finally saw them on the JTree30 tour after being a fan for nearly 20 years. The concert itself was a pretty cool idea; while there were obviously songs that I would have loved to hear them play, it was unique to have them marathon The Joshua Tree as the main set of the concert.”

U2 singer Bono sad A-List pedophile secret revealed. The user continued: “Songs aside, the concert itself was nothing short of spectacular. It felt like a big party where you’re friends with everyone because everyone and I mean everyone is belting out the words to the hits with Bono. The band sounded great, the visuals were amazing, and the crowd was super into it from the lights going down to the end of the encores.”

The user concluded: “The one weird bit I remember about the show (and I know others on this sub have expressed similar ideas) is that the show ended on kind of a downer. I know it was done to tease the audience that new music was coming, but the final song of the show was “The Little Things That Give You Away.” Now don’t get me wrong I love that song; I think it’s the best track off Songs of Experience. It was just a weird choice to end the show on a song that no one in the audience knew. U2 certainly has a track record of ending shows on slow or sad songs (40, Love is Blindness, and Moment of Surrender all come to mind). But those are songs that at least people knew. It was just odd. Anyway, U2 concerts are basically religious experiences and if you’re a fan you’ll have a wonderful time.” U2 singer Bono vicious model ‘insult’ revealed.

2 pictures/2 captions:
1: Britney Spears hands @U2's Bono the Grammy for "SIAMYCGOO" as Best Pop Performance (their 2nd of 4 that night) at the 2002 ceremony.
2: Butterfly kisses up and down your wrist.#GrammyAwards pic.twitter.com/ykAQR8gdMF