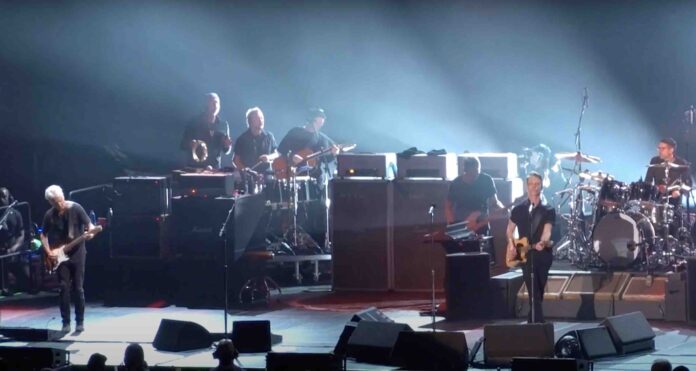 Eddie Vedder mentioned all the connections they have with Red Hot Chili Peppers at Pearl Jam’s second LA Forum show, Sea reports on the PearlJam.com forums. The recap stated, “He names off people he heard were here tonight. He makes heartfelt mention of Taylor Hawkins’ family that are here tonight. He gives an emotional tribute to Taylor and introduces Matt Cameron who will be singing a song Taylor Hawkins wrote and Matt’s special guest Mark Guiliana plays drums.}”

Rock and roll has always been about the party lifestyle. No matter what decade you’re in, whether you’re Robert Plant or Green Day that fact will certainly never go away. The Red Hot Chili Peppers are certainly no exception to this as, during an interview with Rick Rubin on the Broken Record podcast, band member and drummer for the Red Hot Chili Peppers, Chad Smith discussed an interestingly awkward situation on how he and fellow bandmate, Flea got chased off a stage, naked, while performing by police. Credit to Ultimate Guitar for the following.

“We played in Japan and there was a typhoon. We were on stage for that, not too long. And the stage fell. And Anthony – remember when Anthony had his motorcycle accident? He had that big cast, with the pins and stuff. So, he’s in a cast, and the typhoon – the cymbals and drums are like blowing into me, I remember that not being like a great time. But that was just weather stuff. That happens all the time.

“I remember playing in Green Bay, I think it was on the ‘Mother’s Milk’ tour. And we used to, you know, go on stage, scantily clad, and certainly at a certain part of the show, at the end, we would do a song, and in Green Bay, pubic hair in public, not okay, not having it. So, the cops, they ended up chasing Flea and me, and we ran out of the gig. [laughs] It was cold, and we just tried to ditch the cops and kept running to fields, and we ended up in this guy’s house. They’ve never caught us, and we ended up playing video games in this guy’s house that we just knocked on the door and said, ‘Can we come in?’ And we’re naked! [laughs]”

Fans certainly can’t get enough of the latest Red Hot Chili Peppers release ‘Unlimited Love’, which came out April 1st. One amateur reviewer wrote: “Unlimited Love is a brilliant album overall and continues to get better with each listen! Standout tracks are It’s Only Natural (in my top RHCP songs of all time), Here Ever After, Whatchu Thinkin, Black Summer, The Great Apes, and The Heavy Wing. So glad that John Frusciante is back!! I’ll be rocking out to this album for a long time and can’t get enough!”