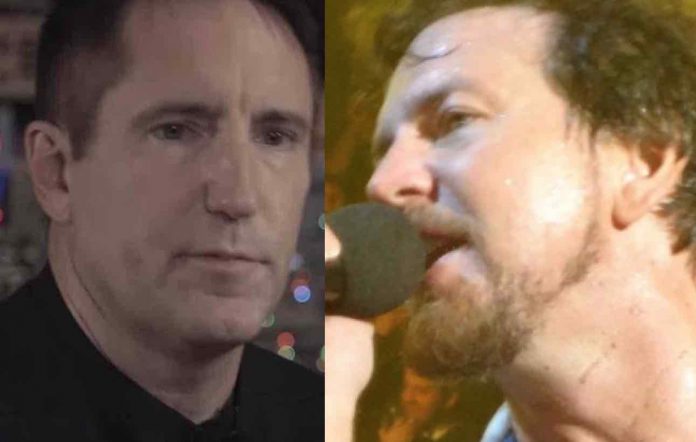 Pearl Jam had a mysterious teaser of their new single “Dance of the Clairvoyants” air on Bill Simmons’ podcast recently from their new album Gigaton, with Shazam identifying the song. Many fans have pointed out the intro sounds like Nine Inch Nails.

Jamily Matters reported on Facebook, “We can confirm that this is the intro of the new Pearl Jam track. The song is trippy af and has a Talking Heads vibe. Also heard another track off Gigaton and if you like PJ rockers, you’ll enjoy it. A big ol McCready solo for you to chew on.”

Dreamweaver posted on the Ten Club board, “It could sound like a Jeff and Matt groove. Just not sure if I’m trying too hard to believe it…”

JJM33 said, “The way Bill says, ‘some new music’, definitely is interesting and makes me think it is DoC…what a wildly different direction for PJ if that is the case.”

BF25394 chimed in, “The synth part is the bit that sounds uncharacteristic of Pearl Jam’s oeuvre to this point. The bass line sounds like ‘Cannonball’ by the Breeders. But, sure, it could be Pearl Jam. If it is, I’m definitely curious to hear where it goes from there.”

Sobelberg8 commented, “Outside of Shazam I have confirmation that this is legit. Second song titled Super Blood Moon with mid-February release.”

TN49724 added, “The Cannonball comparison is spot on. When I first heard this clip I thought it sounded very familiar. Pretty wild direction if this is DoC. The acoustic version of this should be interesting…”

RP112579 replied, “Considering it’s only bass and drums, I’m guessing Mike and Stone’s guitars will kick in not long after that 10 second intro. So, it could get better, if you think the guitars will make it better. I’m very interested to see where this songs goes after that clip.”

Vedd Hedd chimed in, “I tend to like some of the weird stuff. Hummus, Aye Davanita, Pry, To. Master/Slave. I really like You Are. This new song sounds a bit like You Are mixed with Inside Job….but I just imagine that we will hear some guitar. This was a snippet to make you go “wtf”.

They would not give you a snippet of STBC, Hail Hail, MYM, WWS at this stage. I like their tactic here and looking forward to see where this song goes.”

Vedd Hedd said, “So I don’t usually listen to Bill Simmons, but I know he is a huge fan of Pearl Jam. Is it true that he only plays PJ songs on his podcasts?

If so, it wouldn’t be crazy for PJ to let him have a 20 second clip, to play on the friday before the single drops, right? Also, if it is his kid’s band, wouldn’t that be easy to find?” Eddie Vedder’s wife recently reacted to a Chris Cornell widow insult.