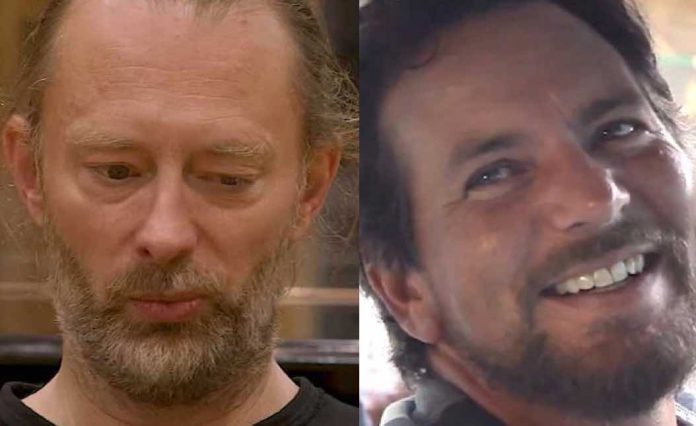 Pearl Jam guitarist Stone Gossard is hoping that a new Pearl Jam album to follow up Gigaton can venture into innovative territory like Radiohead’s OK Computer and Kid A.

Goossard told Kerrang when discussed how “Dance of the Clairvoyants” has a new sound for the band, “There’s some new territory there, and I think it bodes well for whatever comes next,” says Gossard.

“I think we’re still scratching the surface in terms of what really could be significantly different sounding songs. I guess I would probably compare [what I’m thinking of] to an OK Computer/Kid A moment, thinking about Radiohead’s transformation and the journey that they went on.”

Stone hopes Pearl Jam can hit that mark in their future, “I hope so. It’s not going to be OK Computer, obviously, but a moment where we stumble onto something that is significantly different. That prospect always intrigues me. I’d like to make another record that really shocks people – that makes them go, ‘Wow, that’s unexpected!’”

Trunk tweeted, “Was great to have Stone Gossard of @PearlJam on my show today. First time I had the chance to meet & interview him. Was a fun chat. Thx also to Matt Chamberlain for joining. He has an amazing resume as well. Their new band together is called @PaintedShield.”