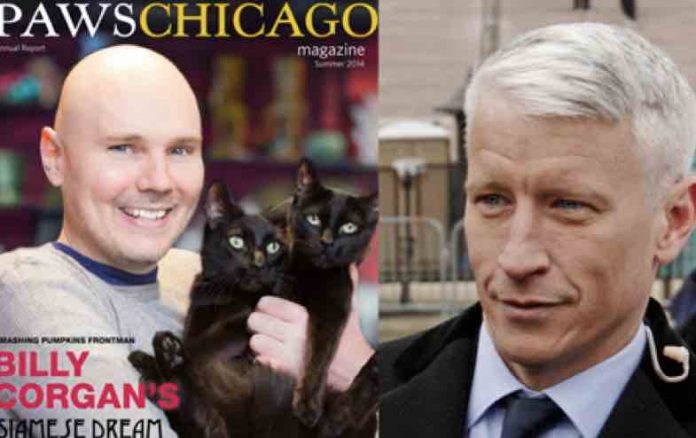 Smashing Pumpkins frontman Billy Corgan revived his 8-year old feud with CNN host Anderson Cooper, calling him ‘guilty’ and from the ‘bad side’ in a new Apple Music interview with Zane Lowe. Alternative Nation transcribed his comments. Corgan called the CNN host ‘fake news’ and ripped Anderson Cooper for ‘melting down’ in a debate with President Trump’s advisor Kellyanne Conway a few years ago.

“By the way, let’s recount the facts quickly. Anderson Cooper, who’d never before spoken about me, four months after I do a cover for a charity magazine, on literally the Eve, I think my album was coming out the next day, runs a report about how I’m a has been rockstar because I appeared with my cats on the cover of a charity magazine.

And the general gist of the piece was how far the mighty have fallen, what an embarrassment. By the way, I went after him completely, old school, OG style. Right? Guy’s never said a word. Why? Because he’s guilty. Because somebody got in his ear and told him, “Yeah, give this guy a kick in the knee,” for whatever f-king reason. So if that’s what the bad side needs to do. That’s fine. They did it, but it didn’t do anything.

Where a bunch of people for their own f-king weird agendas, get to decide who wins and loses. You’re looking at somebody who for 30 years has had to deal with weird people in rooms, deciding whether or not I was going to win or lose. And the great news is from this moment forward, those people can’t make those decisions anymore. It’s the greatest boon for artists, probably in the history of the world, maybe past the Renaissance.”

Corgan called Cooper a ‘globalist piece of shit’ on The Howard Stern Show in 2017. He said Cooper was on a ‘team’ that ‘didn’t have America’s best interests at heart.’