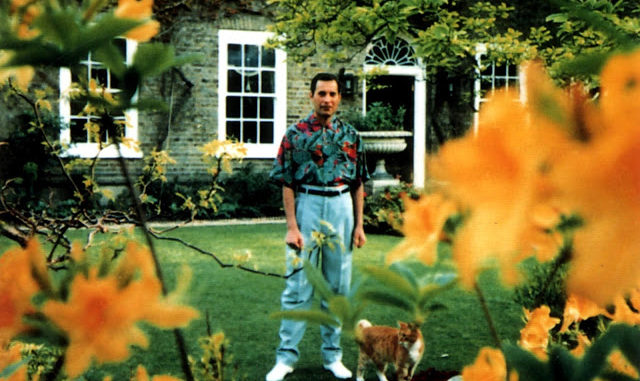 “Certainly those days towards the end were fabulous, full of laughter and joy, Freddie as wicked as ever. He was incredibly matter-of-fact about everything. ‘Oh darling, I’ll just get on with it.’ There wasn’t any self-pity at all.”

He then discussed recording “Mother Love” which later appeared on 1995’s ‘Made in Heaven.’

“He wanted a ballad, so I very quickly sketched something in the studio and Freddie liked it.”

“He said, ‘Gimme some words’. It was a question of scribbling a few lines and he’d chuck a couple of vodkas down — because he could hardly stand at that point — ‘Oh darling, I’ll do it now.’”

“Then he’d prop himself up on the desk and sing the lines. We didn’t quite get to the end. I gave him the last verse and he said, ‘Oh darling, I’m not feeling too good now, so I’ll come back to it. In a couple of days I’ll be fine, we’ll do it then.’ And he never did.”

You can read that full piece at The Times.

A Queen member recently took a brutal shot at a Freddie Mercury classic. Brian May wrote on Instagram on Saturday, “Second night in Madison Square Garden – already just a memory … I had a night of giving it my all yet feeling insecure. This picture seems to capture that feeling. It’s a moment seldom captured of me in my post-Cyborg suit, winding up Bohemian Rhapsody and the set.

Thanks for the pic @freddieliquidmetal – and It makes me happy that it was a great moment for you and for so many passionate attendees … It’s a strange life out here. So much magic, so much warm noise, yet laced with such silences – like right now, as I sit alone with my phone at 1am, wondering what I should share. And what it all really means. Thanks for the love you give us, folks. Bri.”