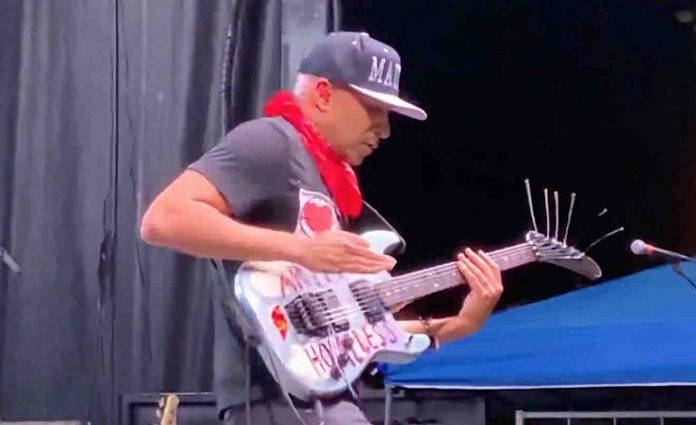 At his first Atlas Underground tour show in Austin, Texas at SXSW a few days ago, Tom Morello revived the spirits of Rage Against The Machine and Audioslave for a stunning medley performance of both band’s most iconic hits, including a rendition of “Like a Stone” where he reunited posthumously with the voice of Chris Cornell, whose vocals were played over the speakers. Morello brought back Audioslave in January at the ‘I Am The Highway’ Chris Cornell tribute show.

Cheddar reports: “Long before the term ‘social justice warrior’ became a tool of the right to describe overly woke liberals, Tom Morello was raging against the machine.

The former ‘Rage’ guitarist became an influential leader of social justice issues in the ’90s through his politically active work on and off the stage. He spoke to Cheddar at South by Southwest (SXSW) this week, where he’s in town to support the 100th anniversary of the American Civil Liberties Union. Morello called the ACLU ‘tireless fighters for freedom, truth, and justice’ who speak up against abuses of executive power and for the freedom of individuals ‘wherever they are.'”

Setlist:
Lead Poisoning
Where It’s At Ain’t What It Is
What Does Freedom Mean to You
Battle Sirens
Rabbit’s Revenge
Every Step That I Take
Bombtrack / Know Your Enemy / Bulls on Parade / Guerilla Radio / Sleep Now In the Fire / Cochise / Like a Stone
Lucky One
Bad Vibes
Vigilante Nocturno
The Ghost of Tom Joad (Bruce Springsteen cover)
Power to the People
Killing in the Name (Rage Against the Machine song)