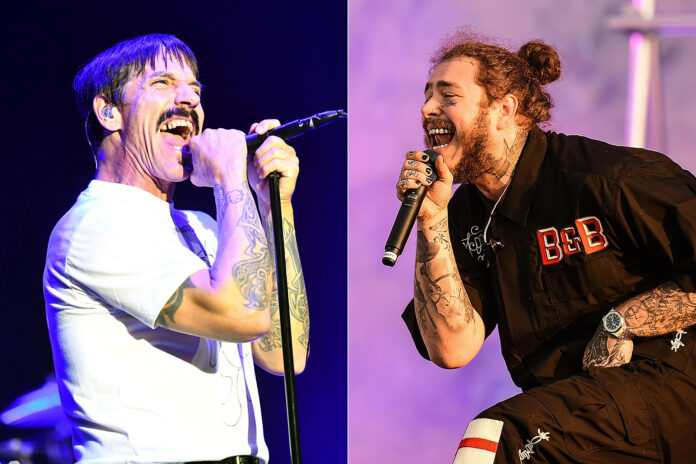 Red Hot Chili Peppers are ripping out their hair to announce a six-date tour of Australian stadiums, for which they’ll be joined by Post Malone. A pre-sale for Live Nation members will open this Friday (July 8th), starting at 11am in Dunedin and Brisbane, 12pm in Auckland, Melbourne and Perth, and 1pm in Sydney.

Additionally, Australian fans signed up with Telstra will be able to access a pre-sale this Wednesday (July 6th), beginning at 10am in Brisbane, 11am in Melbourne and Perth, and 12pm in Sydney. Kiwi fans will have a similar pre-sale via Vodafone, with Dunedin’s starting at 10am and Auckland’s at 11am.

Upon the release of, ‘Unlimited Love’, it quickly became the best-selling rock album of 2022 so far, outdoing most rock albums within the genre. Post Malone has also been dominating the charts as well within the R&B/Rap space with his newest release.

The Red Hot Chili Peppers are also ready to drop another album as soon as possible as it was stated by Anthony Kiedis that they do, in fact, have more than enough material to do so. On the side of Post Malone, there really isn’t much to say in terms of what his next play will be as he recently welcomed his new born daughter into the world.

Flea is very excited to go on tour with Post as he took to Instagram to let all of his fans know where they can catch the Red Hot Chili Peppers and Post Malone. Flea posted up tour dates to the events and the comment section erupted with joy.

Within the space of Post Malone, another artist has been heavily emerging which we feel should get on tour with Post Malone at some point – Exel. Exel has recently been featured in the NBA, NBC, and Forbes for his song, ‘Luka Magic’ and works with Post Malone’s former producer, Saucelord Rich. The song is based upon Slovenian and Dallas Mavericks star, Luka Doncic. The song has been going viral within the NBA world. You can check it out below.