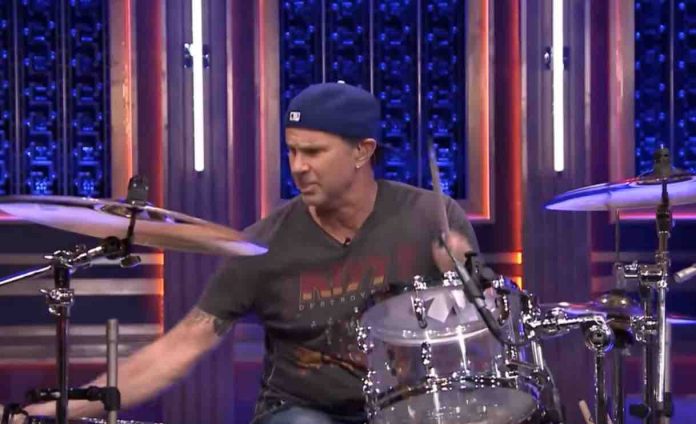 The Red Hot Chili Peppers are one of the greatest and most influential bands of all time but could they also be known for trouble? A recent photo still shows drummer Chad Smith in a police car – perhaps this could be a promotional still or something for an upcoming music video? Perhaps one of the Chili Peppers have good friends that are cops – one thing is for certain, it is very scandalous looking, to say the least, though it’s obviously all in good fun. This Red Hot Chili Peppers’ member weight loss will stun you.

The Red Hot Chili Peppers are in for a monumental 2022 as the band is set to release their latest studio album since 2016’s ‘The Getaway’ entitled “Unlimited Love”. That album, which will be dropping April first also features the debut single entitled ‘Black Summer’. In addition, the band will be going on a 2022 global stadium tour in promotion of the new album which will kick off internationally Saturday, June 4th in Seville, Spain, and domestically in the United States Saturday, July 23rd in Denver Colorado at Empower Field at Mile High.

During a recent interview with California-based rock station K-ROQ, Flea discussed the impact that John Frusciante’s return to the band has had. Credit to MusicRadar for the below.

In addition, Flea stated: “Really, the big thing is that we all speak the same language, and when he is in the band we are able to communicate with each other without speaking and create a lot of music in a really fluid way.”