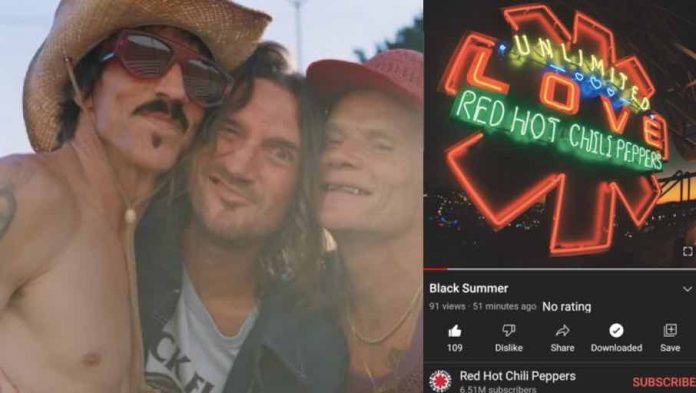 The new single ‘Black Summer’ by Red Hot Chili Peppers has been leaked. They also showed off the song’s artwork. The artwork that was shown has a very similar feeling to a late-night out at a dive bar. We are presented with a soft neon light giving off a gentle glow, which brings in a very nostalgic feeling.

The video clip of the song was uploaded on the official YouTube channel of the band but it is currently unavailable. However, the fans can hear the song as it started surfacing on Reddit. You can change your territory on YouTube to stream and download it as well.

One of the fans talked about the song. The fan was luke-warm the new single as they said: “The solo is what elevates this song. The chorus is decent too – but it takes a long time to get there. I’m reasonably happy with it.”

While another fan said: “I mean, this isn’t pop, it’s soft rock. You should not be expecting something to follow the pop formula by rushing to the chorus, that’s just not how things work.”

Previously, Red Hot Chili Peppers had teased the fans about the release. A snippet of new music was shared through a video posted on their Instagram account. The video featured John Frusciante and Flea jamming live in a studio through a hazy, mirage-like blue filter. John Frusciante was also heard playing a great solo, as Flea and Chad Smith (not shown in the video) whipped up some mean grooves.

This anticipation comes off the Red Hot Chili Peppers’ announcement of a global stadium tour. The tour is set to kick off in Seville, Spain on June 4th and end in Arlington, Texas on September 18th. Many notable names are set to perform as openers for the tour including The Strokes, St. Vincent, and A$AP Rocky.