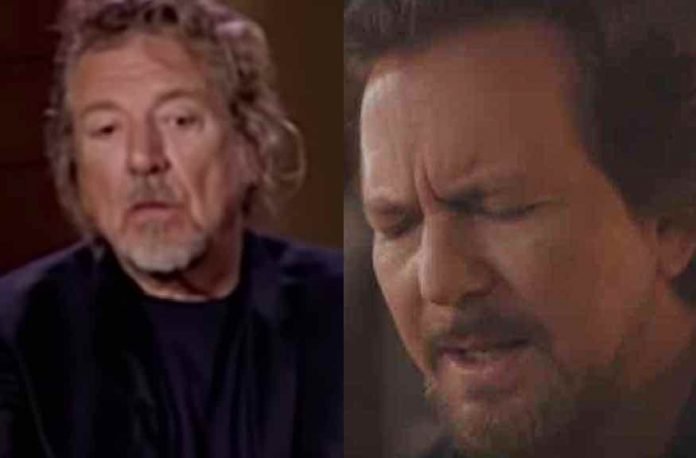 Pearl Jam has been one of rock’s long-standing institutions for several decades now. With nearly Since the group’s creation – Pearl Jam would go on to sell 32 million albums in the US, including all of the band’s live official bootlegs, and over 100 million copies worldwide until 2017. On the other hand – Led Zeppelin has undeniably dwarfed that by selling more than 300 million albums worldwide, including 111.5 million certified units in the United States.

Robert Plant saw this classic rock icon before their passing. During a recent interview with Guitar Planet, Pearl Jam member Mike McCready would discuss recording the ever-popular Mad Season record with Alice In Chains great Layne Staley back in 1994. Here, he discusses the album and in addition how some people would compare the classic Pearl Jam track ‘Given to Fly’ to the vintage Led Zeppelin tune ‘Going to California.’ Credit to the outlet for the following quotes.

“I recorded the Mad Season album, Above, with Layne Staley around the time that I wrote this song, in ’94. This track was a huge deal for me because it was the first time I’d ever gotten sober, and making that Mad Season record gave me the confidence that I could really do this and write songs in a new frame of mind for Pearl Jam records as well.

McCready would continue: “On the day I wrote it, it was snowing in Seattle. I was messing around with different tunings, and I had this euphoric feeling, like, ‘Wow, I can write those kinds of songs now.’ I felt like I had a new confidence.”

The Pearl Jam bandmate would also say: “Before then, the fact that there were so many great writers in Pearl Jam made me feel less confident in putting my songs forward. But with ‘Given to Fly,’ I felt that I could relate to the lyrics that Eddie came up with. It was a turning point for me, and it’s one of my favorite songs of all the ones I’ve ever written.”

Later during the interview, McCready would also reveal how Led Zeppelin frontman Robert Plant would have quite the reaction to ‘Given to Fly’ and how in jest, Eddie Vedder once introduced the song as ‘Given to California’ during a Pearl Jam concert in Sweden – a show that Plant attended. Robert Plant revealed why he reunited with this long-standing former bandmate.

McCready later added, “Some people have said it sounds a little like ‘Going to California.’ It never even occurred to me at the time. I’ll certainly cop to ripping off some Zep in my songs at times, but that wasn’t the case on this one. [laughs]

He concluded: “Robert Plant came to one of our shows in Sweden, and he jokingly gave me some shit about it. It was glorious. Eddie even introduced the song as ‘Given to California’ on that date.” [laughs]