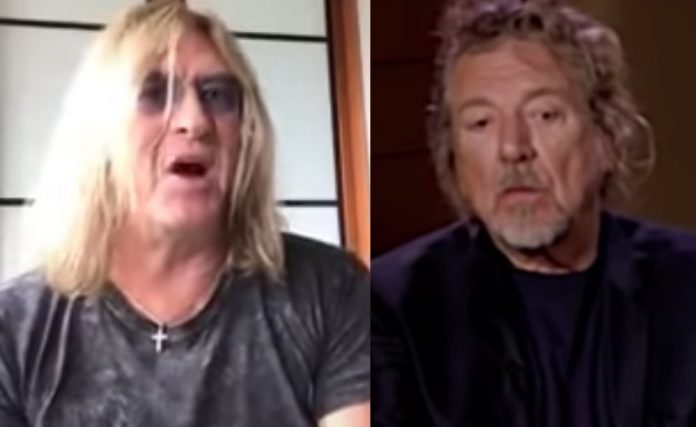 Led Zeppelin frontman Robert Plant  revealed that Rock and Roll Hall and Fame hair metal group Def Leppard sound a bit like Led Zeppelin on a new edition of his podcast, Digging Deep while discussing recording his VH1 Crossroads appearance with Alison Krauss. Fans have begged for a Led Zeppelin reunion over the years, but Plant has preferred to do new projects with artists like Krauss. Alternative Nation transcribed Plant’s comments. Robert Plant drinking at a bar was revealed in bizarre photos last week

“Anyways, they asked for me to give it a whirl and see what I think. Alison [Krauss] likes the Eighties very much and loved Def Leppard – I said: ‘that’s us then!’ It had to be signed, sealed, and delivered here. So anyway, we decided there was something good that could happen between us because our voices were so different. Yet, if I backed off and took away the whole edge off the whole vocal performance I could sing very delicately, and it worked.

So what we did was, we were invited to play at the Cleveland Ohio Symphony in the night’s tribute to Lead Belly. Along with Odetta, Clarence ‘Gatemouth’ Brown and Harry Belafonte and stuff. I thought that these people were singers who left such a mark on all of us – maybe they are bringing me in for a bit of balance, or something.” Robert Plant also revealed an eerie Kurt Cobain similarity recently.