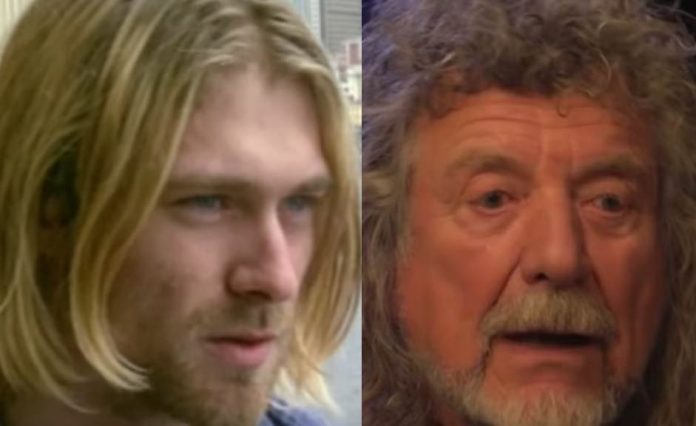 Kurt Cobain made “Where Did You Sleep Last Night” famous during Nirvana’s MTV Unplugged performance in 1993, and Led Zeppelin frontman Robert Plant revealed that he learned to harmonize late in his career from the song with Alison Krauss, which was originally Leadbelly’s “In The Pines.” Alternative Nation transcribed his ‘Digging Deep’ comments. Surprising photos of Robert Plant drinking at a bar surfaced a few days ago.

“I didn’t really know too much about the underbelly of folk and Europeanesque American music, didn’t know anything about it really. I knew mostly the references Bob Dylan made to Woody Guthrie, I knew about maybe the coffee house scene in New York. I knew about Sister Rosetta Tharpe and Leadbelly and stuff like that, and on a country angle, I only knew what we knew here, which were country hits.

Floyd Cramer, Glen Campbell. Glen Campbell was a reflection of white America and songwriting, from Jim Webb or whatever it might have been. I knew about Bob Luman and Don Gibson’s ‘Oh, Lonesome Me’ that Neil Young had covered. I knew all about that, but I didn’t know what was going on around the fireside by country America.”

Howard Stern recently dropped a Led Zeppelin reunion bombshell. Plant later said, “We were doing things like In The Pines. ‘Black girl, black girl, don’t lie to me.’ All that stuff, and we were rehearsing it, and [Alison Krauss] said one thing. ‘I’ve got to ask you one thing.’ ‘What is that?’ ‘Any chance you could sing thing twice, so that I can find out how to sing a harmony on it?’” A light came on, a sort of torch shot across. I went, ‘Oh, so to harmonize, everybody has to know the part.’”

Plant previously said on Kurt Cobain and Nirvana’s explosion in a television interview, “You know what happened is punk said we’re fed up with Pink Floyd, Jethro Tull, Led Zeppelin, the sort of skeleton of The Beatles, let’s have some music from the street. What happened in America in 1991 was you finally got your own punk.” Jimmy Page ripping a Led Zeppelin icon for being on drugs was recently revealed.