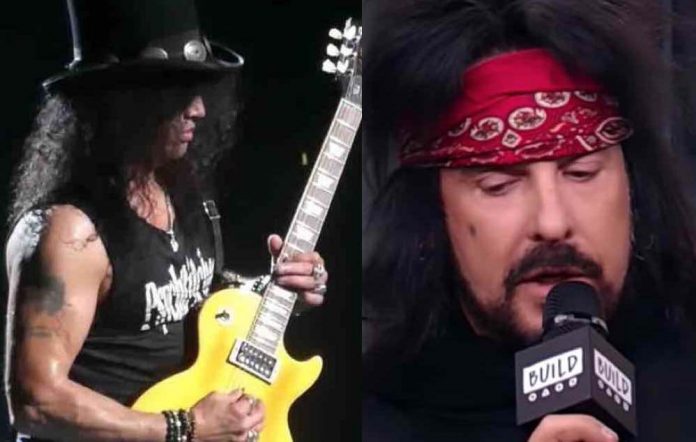 In the new Netflix Motley Crue biopic ‘The Dirt,’ actors portraying Guns N’ Roses members Slash and Steven Adler are seen high on heroin with the actor playing Nikki Sixx in a scene that takes place on December 23, 1987 at the Franklin Plaza Hotel. It’s unclear if this ever actually happened, as the film takes a lot of creative liberties. You can see the clip below.

In a recent Guns N’ Roses Central interview, former Guns N’ Roses manager Doug Goldstein discussed Axl Rose’s bitter feud with Motley Crue frontman Vince Neil, and how he allegedly wanted to kill him in a fight to the death in a country where it was legal, and how that challenge is what shut Neil up for good and ended the feud. Alternative Nation transcribed Goldstein’s comments.

He said during certain times touring together, Guns N’ Roses and Motley Crue members did not interact that much.

“We didn’t really socialize with them much. I mean, they kinds stayed in their camp and we stayed in ours.”

The interviewer asked, “Who do you think would win in a fight: Axl or Vince?”

Goldstein said, “Axl. You know, he’d kill him. He had me call Doc McGhee who managed them at the time because Axl was just tired of Vince running his mouth. And he said, ‘I found a country where you can fight to the death and we don’t have to announce it. Just, let’s get on a plane and go. I’ll put up what I got, he could put up what he’s got.’ And he was serious. And low-and-behold, we never heard anything publicly again from Vince.”