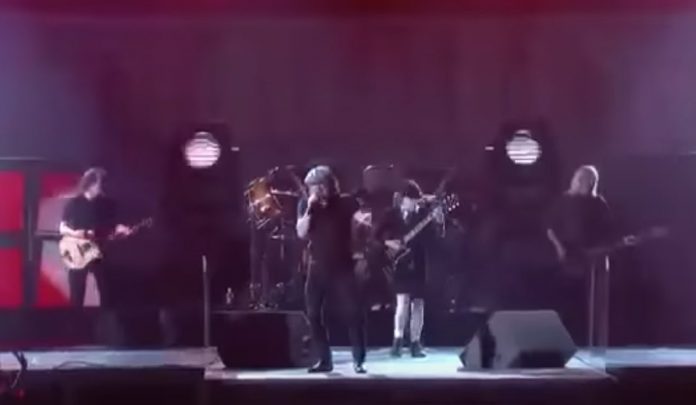 AC/DC drummer Chris Slade has announced his ‘last shows’ he has planned for right now. He said, “For one of the last shows of 2019 – ACDC drummer CHRIS SLADE with his band THE CHRIS SLADE TIMELINE hits Eastern France on Thurs 5 December.” An AC/DC member going to jail was revealed a couple of days ago.

Venom Injector recently wrote about AC/DC’s guitar tone change over the years on ACDCFans.net, writing, “Even if working with different producers and recording equipment over the years is certainly one of the obvious reasons, I always felt since the BB album in particular the guitar tone changed, especially Angus Young’s one. It seems to be less distorted and brilliant, a bit more like a muddy crunch.

As far as I know they pretty much always used the same setup in regards to amps and guitars, often using some of their vintage guitars and gear used on early albums for most of the new records up to ROB, but even on SUL, which was produced by George, the guitars don’t sound like on their 70s material at all. Albums such as DDDDC, LTBR and PA in particular had a metallic quality to Angus’ guitar that made ’em sound extremely heavy for those times, while the more recent albums sounded a bit tame in comparison. The beginning chords of ‘Down Payment Blues’ are a good example of what I’m referring to in terms of sounding heavy and ‘metallic.’ In general on those albums when the band was cooking the sound was huge, but I don’t think it was necessarily a matter of having more gain on their amps; or maybe it was?

A stunning list of new AC/DC songs with Brian Johnson leaked earlier this week. Venom Injector added, “All albums between HTH and FTATR had bigger productions but the guitar sound was still heavy. FOTS was rougher but had impact. FOTW guitars sounded even heavier than all their albums before. Not much a fan of BUYV guitars but they were still pretty good, TRE had big guitars too. Afterwards I think the band consciously tried to regain their 70s feeling since they got Phil back and BB was released, but it seems to me that they never managed to achieve their 70s guitar sound again and I can’t understand why.

The band always worked a lot on dynamics while playing but you could tell when they were going from a softer part to full-on guitar mayhem, while on all albums since BB it seems like the sound went constantly flatter. Even on ROB, which sounded a bit more powerful than BI, when they play riffs like the one on BBF it doesn’t sound like, let’s say, ‘Riff Raff’ at all. I think it’s something that goes beyond the quality of songs/riffs.” An AC/DC member was called an alcoholic by his wife a few days ago.