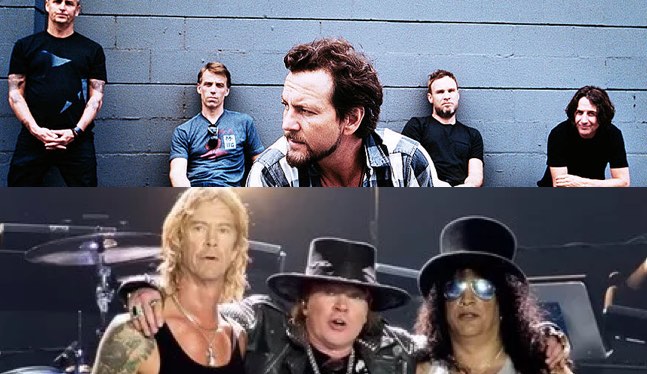 Guns N’ Roses guitarist Slash has revealed a photo of Eddie Vedder hanging up high at a Pearl Jam show, which used to frighten his bandmates as they feared for his safety. Slash wrote a message to celebrate the Grunge icon’s 56th birthday, saying, “Happy Birthday #EddieVedder iiii]; )'”

KROQ’s Nicole Alvarez tweeted, “Happy birthday to my hero ! I don’t think I’ve ever called anyone else that except the man that raised me ,but #EddieVedder is the lighthouse in my life . I have loved him for all eternity simply because his voice is my home .Thank you for all of the light you share hero of mine!”

A fan named Thelma tweeted a quote from Ed to mark his birthday, “People listen to music for different reasons. Some people, -its background music— but other people need it to survive. Other people need music to get things out and maybe that’s just where I’m coming from, you know, when things weren’t easy for me.”

Vedder performed a show for teachers earlier this week, with Rage Against The Machine guitarist Tom Morello tweeting, “My mom was a public high school teacher for 30 years so I am proud to join forces with @Springsteen @StevieVanZandt @MissMargoPrice #EddieVedder and #JacksonBrowne to #StandWithTeachers this Monday, Dec 21. Info at http://Teachrock.org/StandWithTeachithTeachers.”