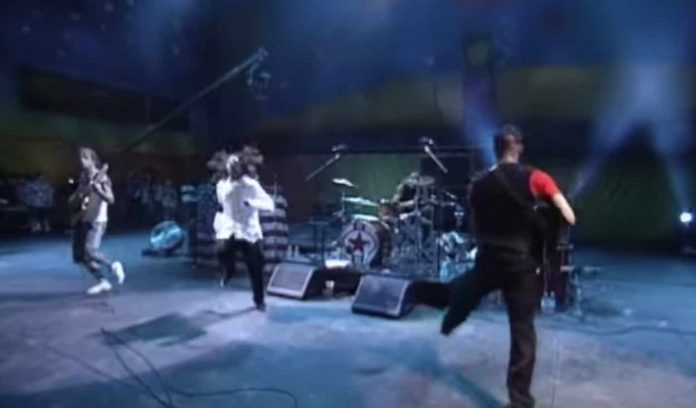 Rage Against The Machine drummer Brad Wilk’s girlfriend Juliette Lewis has revealed that a new tour dates announcement is imminent on her Instagram story. She posted a photo of the RATM Instagram and said, “You should follow @rageagainstthemachine for all updates…I wonder what those updates will be…And when.” Tom Morello announced a final concert yesterday.

Freeleop25 commented, “I’m holding out hope they’ve got something in the works to avoid scalpers. At least as much as possible anyway. But who knows.”

BandofGypsies wrote, “Recall she was one of the very early ones to follow this account, too, when it only had a couple hundred/couple thousand followers and was unverified, and dates were still in the ‘pre-confirmed’ phase…”

Alkren posted, “I can’t wait to see them again. I look at the dates and hope to be at the El Paso show, but am hoping for tickets to any of the shows, minus Coachella.

I saw Rage twice in 2007 (Rock the Bells Fest in San Fran & Voodoo Fest New Orleans on my birthday). They opened with Testify and never looked back. Thinking about the opening build to that song and then it just popping!!! Man, I cannot wait!! Gotta get back in mosh shape!!”

A Rage Against The Machine member revealed a rehearsal photo earlier this week. Freeleop25 said, “Saw them at RTB in New York and I had to get out of the pit lol. Was on the rail back to back nights on the BOLA tour. Much younger then… I could hold my own in the pit. Zack was on fire those two nights! Jumped into the crowd both nights during war within a breath!”

Alkren wrote, “Noice!! I was up against the rail in San Fran with 80,000+ people behind me… that was an amazing experience. Voodoo Fest I was not as close, probably about 25-30 “rows” back from the rail.”

Bandofgypsies chimed in, “Yeah I was at the rail for Alpine Valley in 07. It was nuts. Tom’s mom came out to introduce the band before they busted into Testify. The place then exploded for 90 minutes straight.” Rage Against The Machine singer Zack de la Rocha ‘canceling’ a new album was revealed a few days ago.