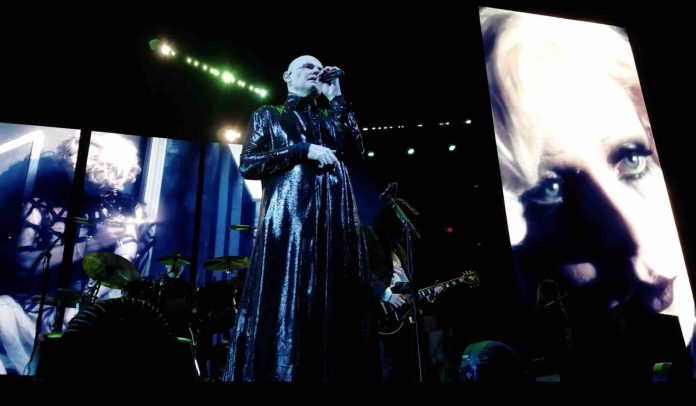 Smashing Pumpkins fans on Netphoria recently posted that the new video played during “Try, Try, Try” on the Shiny and Oh So Bright tour appears to be inspired by the band’s former bassist D’arcy Wretzky. A beautiful actress who looks strikingly like D’arcy appears in the video, and is shown struggling with drug addiction.

“Cherub Rock got the crowd going wild. And there’s no way the video during Try Try Try isn’t about D’arcy. The girl has long hair at the beginning and looks angelic and then cuts it and spirals into drug use and darkness.”

“Looking at the video I do agree, having in mind pictures of her with a vodka bottle and crook punctures in 1998.”

The Pumpkins have not commented on the meaning behind the video, so the similarities could be entirely coincidental and have nothing to do with D’arcy.

D’arcy discussed her past struggles with drugs that started during her later years with The Smashing Pumpkins and continued in the years after she left earlier this year in an interview with Alternative Nation. She said she is clean now, and in better physical shape than her former bandmates.

“I’m in better shape than any of them. My Mom was a health nut, and she taught us about eating healthy. I eat totally clean, I live and work on a farm.”

She also discussed quitting drugs, “I’m just incredibly lucky; I don’t have a genetic predisposition for addiction to anything but television, that’s pretty much it. My metabolism just changes so quickly that I can’t do very many different kinds of drugs. I was self-medicating, or as I said in Texas, trying to kill my brain. I even tried to OD, and it didn’t work. I could do copious amounts of things, but the stuff stops working, and if you’re ever doing it for fun, it doesn’t work, and then you couldn’t get real drugs.

I got to the point where I found the right medication for me, and didn’t need them anymore. I’ve never been addicted to anything, I could smoke socially. I was in rehab, and many doctors didn’t believe that I could just smoke socially. Lots of people smoke socially, if I could buy a pack of cigarettes, it could last three months. I’m just extremely lucky.”