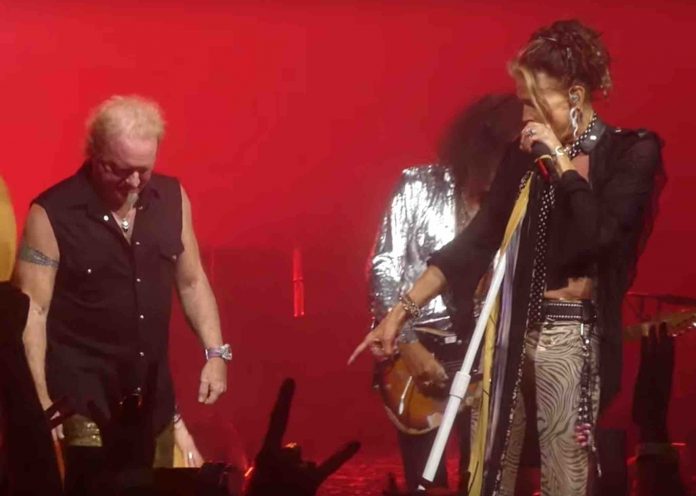 Over on the Aerosmith fan forum Aeroforce, user Pillis trashed the replacement band member, John Douglas, that filled-in for Joey Kramer at this year’s Grammy Awards and lamented how ‘tragic’ the band sounds with Kramer in the lineup and also commenting on Steven Tyler’s vocal performance. Tyler and his other bandmates chose to carry on with hiring the replacement drummer. The same drum tech that filled in for Kramer at the awards show is continuing to fill in the acclaimed drummer during Aerosmith’s latest round of new Vegas shows. Steven Tyler girlfriend leaks painful Joey Kramer photo.

The user stated: “What do you mean you don’t understand the fuzz? Mixing issues apart I think this drummer sucks as a fill-in. He’s soulless, the cymbals are all over the place, he doesn’t play the songs by intuition and sometimes his tempo is off. I accept Steven losing his voice and Joe’s already known sloppy and inconsistent playing because well, they’re the band and wrote the songs but a drummer tech? It should sound like the record or at least put some heart into it while he sounds like a cold and faulty drum machine. Sorry, not sorry. Come on the band sounds TRAGIC without Joey.”

Steven Tyler’s daughter bends over in black lingerie photo. Fellow Aeroforce forum member fwanger commented on the situation by typing: “This was such an odd situation. Joey feeling like Steven Adler being asked to play Chinese Democracy to stay in the band and the band thinking he is playing like Frank on You Could Be Mine. This whole thing feels like it was completely mismanaged and something that really could and should have been handled behind closed doors with managers. I mean what the fuck are they paying these people for? Honestly, how much prep does Joey need for Walk This Way and a snippet of Livin on the Edge? But why did Joey have to go all sue happy?”

The user continued: “It’s sad that at this stage of the game stupid **** like this has to happen. But then again, we had to have some kind of huge meltdown at the 40th. Why should the 50th be any different? And isn’t it just fascinating how it all coincided with two very big events for the band plus the release of a 50th anniversary People edition? It’s almost like a band with several decades of experience in press figured out how to manipulate a situation to be essentially harmless yet get their name out there with the likes of Billie Eilish and I don’t know, Crack Wacka Flocka Tatoo Face 648×32 to the 5th.” Steven Tyler ‘ruins’ Joe Perry guitar solo in video.