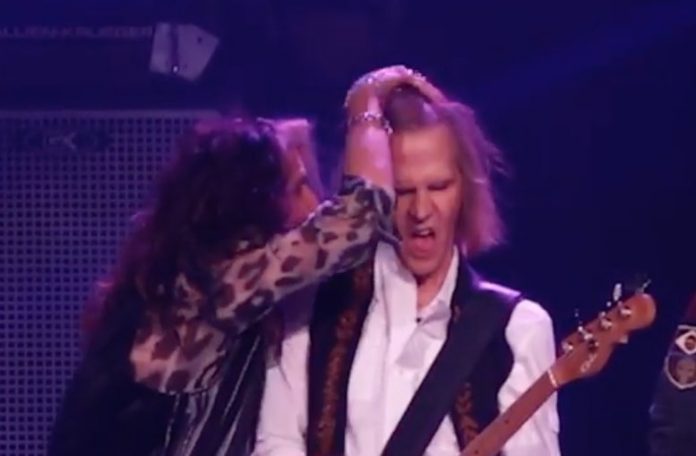 To say that Steven Tyler, acclaimed Aerosmith frontman has had a pretty weird November would be a bit of an understatement. Most recently, Tyler posted this outlandish picture of him groping his out backside, seemingly breaking the internet and prompted a response from his daughter, Mia. In the same month, however, Tyler has also done some pretty wild things including having his microphone pumped by fellow bandmate Joe Perry.

Keeping in the same vein of things, during another one of Tyler and company’s ‘Deuces are Wild’ Las Vegas residency shows, the Aerosmith singer can be seen playing and pulling with the hair of another bandmate. This time, Tom Hamilton, legendary bassist for the group. You can check out the video clip below.

In other news regarding Aerosmith fans of the band discussed the impact and legacy of the group’s 1976 hit ‘Back in the Saddle’ off of their fourth studio album, ‘Rocks’.

JJ wrote: “A great song – nothing quite like it. A great opener as well. The first time I saw Aerosmith this was the opener, but the curtain was raised slowly, rather than dropped. That slow reveal added to the excitement.”

And 4bits4licks76 stated: “This is it. The song that made me an instant fan. A few thoughts about Saddle: It’s timeless. Still sounds amazingly fresh & relevant in my opinion. The song just has such badass swagger & attitude. This song absolutely inspired me to get in fights, smoke weed, drink vodka, get laid or at least try to at a young age. The song is about rebellion; It basically says: “we’re coming into your town, we’re going to **** all the whores & shoot whoever gets in our way”. “I’m calling all the shots tonight I’m like a loaded gun”. Yep, this song appealed to my “rambunctious “ side and I loved it- Still do. It’s obvious, isn’t it? “Four Bits gets you time in the racks I Scream for more”. A perfect opener on a flawless album. It defines Aerosmith to its 1970’s core. Steven Tyler was recently caught trying to kiss young assistant in this photo.