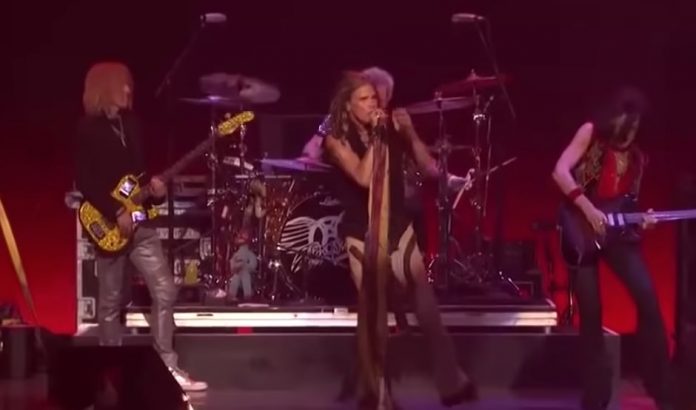 Aerosmith bassist Tom Hamilton recently sat down with Joe at Bass Player Magazine. The genesis of the classic track “Janie’s Got A Gun” came up. Steven Tyler makes a young woman cry in a photo.

TH: We were right at the time when everybody brought their song ideas in to get the process started on what became the Pump album. I had this thing that started with plucking the harmonics at the seventh fret on the G and D strings, and while that was ringing, playing the notes that became the intro to Janie on the E string. My song idea seemed to fall on deaf ears, but about a month later, when we were well into arranging the songs for the album, Steven came in one day and proceeded to play the complete version of the song, start to finish. We all stood there knowing we were hearing something really amazing. I noticed that Steven had used the intro of the song that I had brought in. I was a little miffed, but decided not to make an issue of it at the moment. Sometime later, when we were almost finished with the record, Steven called me one day and said, “Hey I’m puttin’ your name on Janie’s Got a Gun.” Of course, I was really happy about it, but the song was really written by Steven. If my little idea at the beginning led to that masterpiece, so be it. Aerosmith reveal why Steven Tyler ‘replaced’ bandmate.

Aerosmith will be performing at this year’s Grammy Awards, per their recent Instagram update: “Watch Aerosmith the MusiCares Person of the Year, perform at the 2020 GRAMMYs on Sunday, January 26th on CBS.” Billie Eilish and Lizzo will also perform on this special night. Aerosmith unload on stunning Paul McCartney ripoff.

Redditor cliffobvious reacted: Let’s hope this marks Joey’s return. He’s namechecked in the article, and the event’s only a couple weeks away…