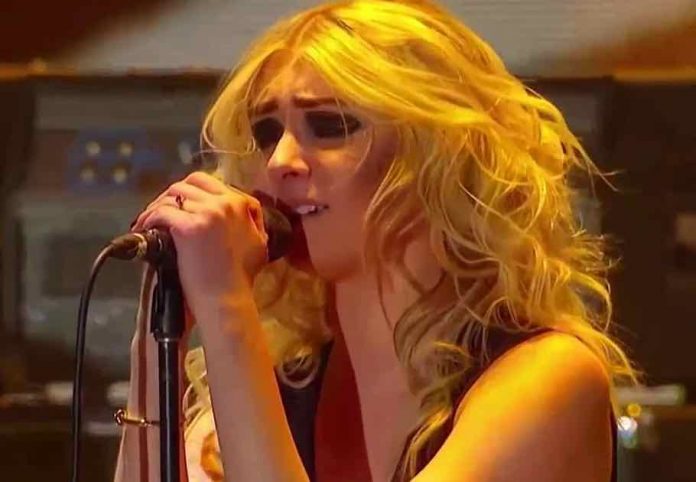 The Pretty Reckless singer, Taylor Momsen is looking lean and mean in this new photo that she recently uploaded to her Instagram account where she is clearly not ‘waiting for a friend’ and telling someone that she obviously doesn’t want to be there to leave the scene immediately. Never the less Momsen looks ravishing in this hot and lacy lingerie outfit! Taylor Momsen ‘dirty’ lingerie photo revealed.

One fan on Instagram had this to say about the photo: “Sighs what a ****. Give the woman some privacy if she wanted her fans to see her nude she would do a nude photoshoot but clearly she Don’t want her fans to see her nude if she doesn’t want to be seen that way then Don’t try to invade her privacy just to get a picture of her that way you are beautiful thought, Taylor. Keep on rocking.” Taylor Momsen caught ‘riding’ surprising man in photo.

In other news regarding Taylor Momsen and The Pretty Reckless, fans recently took to the official Facebook page for the band to react to the news that the group will be playing their first set of shows since 2017 – One in Camden, New Jersey at the MMRBQ event, t0he Blue Ridge Rock Festival over in Concord, Virginia, among others. Steve wrote on Facebook: ” I have never seen you guys perform live I just discovered your band in your music about three months ago cannot wait till the Sonic music festival Columbus Ohio coming just to see you guys you truly are amazing love the music.

Taylor Momsen grabs backside in leather corset photo. Seemingly upset fan Steven put: “After four years – no mention of any new music/album but just a t-shirt? No tour dates, just a few festivals, fans just kept waiting and waiting.” While Bennett said: “So looking forward to the new The Pretty Reckless in 2020. Really hoping this album finally brings the band Down Under to Australia. I’m an expat American, my daughter and I have been waiting so long to see them live.”