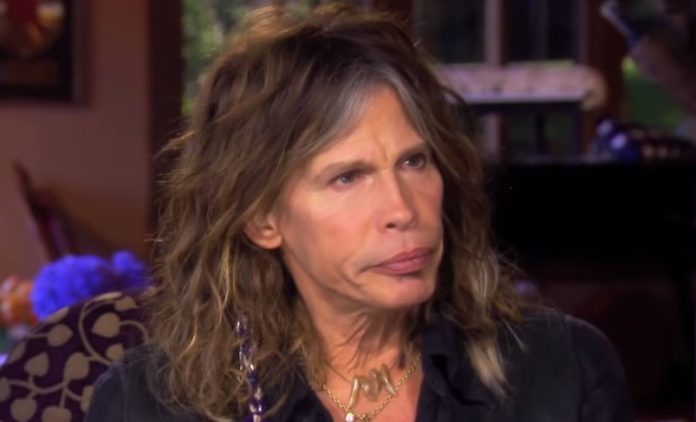 Aerosmith frontman Steven Tyler‘s daughter, the incomparable Mia Tyler recently took to social media via Instagram to discuss the visions that she’s had lately of her recently deceased mother who passed away due to a brain tumor. Steven Tyler’s daughter bends over in black lingerie photo.

Tyler wrote: “Been feeling my Mom’s presence a lot lately, which isn’t something I usually feel at all. I genuinely feel like she’s pushing me towards something important. I felt her when I had Ax and now she keeps popping up. I was just talking about her gold necklace I have and then today I get sent this picture of her I’ve never seen, and she’s wearing the necklace. I don’t know, but it’s just one of many visions I’ve had of her the last 2 months. I think she’s trying to tell me something. I swear if I see ladybugs that’ll just validate she’s pushing me towards this next chapter in my life.”

In other news regarding Mia’s father, Steven Tyler fans took to the Aerosmith fan forum, Aeroforce to discuss a particular day in the group’s history. This time from August 14th 2010 where Aerosmith along with The J. Geils Band plays the hometown crowd at Fenway Park in Boston, Massachusetts. A moment very appropriate to look upon on with the group also playing celebrating their fiftieth-anniversary at the famous baseball stadium. Steven Tyler ‘ruins’ Joe Perry guitar solo in video.

Pillis said: ” The setlist in 2010 was overall my favorite. ‘Sweet Emotion’, ‘Baby Please Don’t Go’ ‘Draw the Line’ was such an epic moment! But I could tell Steven [Tyler] and Joe [Perry] weren’t in their best form and kinda struggled to keep up the pace and the heat took the best of them that Night.”

While SlashisEnglish stated: “Eight years? Bloody hell! 2010 was also Aerosmith’s first appearance at Download Festival in the UK. It is my favorite of the three and it ****** down before they came on. Howard Stern unloads on Steven Tyler ‘losing voice’.