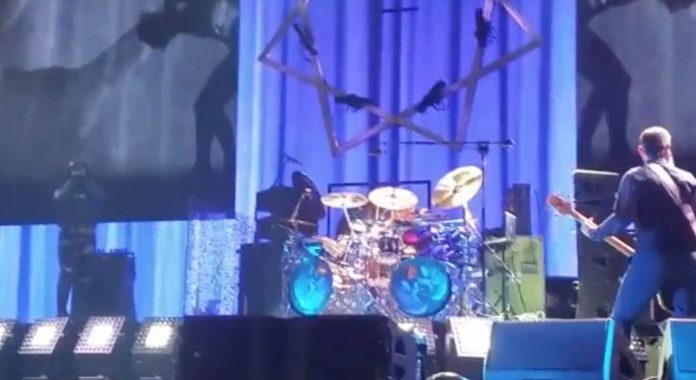 Tool members Danny Carey and Justin Chancellor recently accepted the Best Metal Performance award at the Grammys concert and awards show, but he seemed to forget how to perform the song he won for, not even knowing the length. Maynard James Keenan just revealed why he really no showed the Grammys.

strzalkowski posted on Reddit, “Interesting mistakes by Danny and Justin. So I’ve watched the Grammy Acceptance speech by Danny and Justin and also the afterwards thank you cam with them. I’ve noticed that they have both said 2 statements that are not true and are quite interesting.

Danny said that this award restored his faith in humanity, that people still can listen to a TWELVE minute song. See, 7empest is almost 16 minute track and I refuse to believe that he forgot that.

At the thank you cam Justin said that we’ll see you in another TWELVE years. I think we all perfectly know that between 10 000 days and Fear Inoculum it’s been THIRTEEN years not TWELVE. Here I also refuse to believe that he forgot it’s been THIRTEEN years. So they both said TWELVE instead of the correct information. 12/12 new album hype???? (I am joking of course but it’s quite interesting)”

Pnsnkr responded, “JC/DC only know Pot time where each person experiences time dilation in their own way. This is just a simple case of rounding error in conversion from Pot time to Earth time. I’ve heard DC quote that 7empest is actually 117 minutes long.”

Agent_TALL said, “I think this is mainly what justin was getting at, and maybe danny simply is referring to their average track time. interesting coincidence though.”

Strzalkowski added, “I get where you’re coming from but I think that the meant that between 10000 days and FI its been 12 years. If he didn’t use ‘another’ then you would be totally right.” Maynard James Keenan was recently accused of losing his voice at a concert.