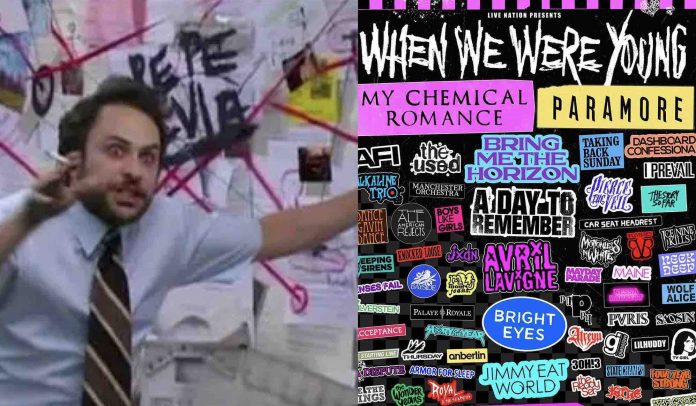 The When We Were Young festival canceled its first day due to bad weather, but day two is set to happen today. Fans are upset though, claiming the pink stage is only for VIP’s based on a photo below. A fan said, “Punk is catering to the 1%.”

We had full intention of putting on the very best show that anyone had ever heard. We love these bands. We love this audience. We tried everything to mitigate the wind. Everything.

When we we informed that todays show was canceled, we were devastated. Of course we wanted to see the bands play. Of course we wanted to smash your fucking faces in with the best sounding show in history. We wanted to show the world that we could pull off 50+ bands in one day smoothly. As far as I’m aware of, nothing like this show has ever been tried, but, we had a Plan. A good one. Showcasing the talents of the younger breed of techs in a post-lockdown world. Between our computers, consoles, processors, notebooks and gaff tape…we were ready to kick your ass.

“Show has been canceled” said the stage manager.

“Yeah, we’re done for today.” Sighed the Stage manager. His normally cheerful face was now washed with disappointment. It fucking sucked. He knew it, we knew it, you know it.

When we asked who made the call to cancel, we were told “Fire Marshall”, which translates to “The City”. We don’t argue. They’re in charge. They only care about one thing: Safety. Not profits. Not Art. Safety. I know it’s not very punk rock, but it’s the right call. Vegas has seen concerts turn into nightmares, so safety is the only true concern. It sucks.

We cased up what we could, covered and anchored all the gear we could, lowered the speakers, reviewed our options on how to proceed tomorrow…made a new plan based off the old one. We’re ready.

But then all we were talking about is how bummed we are for the fans. Everyone of us knows that “this girl saved up for the last 8 months, flew out here from Des Moines by herself, Just to see Bright Eyes. It was her sisters favorite band, sister died two years ago from cancer, always said her favorite times were at Warped Tour….”

Fucking sucks. Cancelling shows sucks. We do this for you, the fans. But never forget, we are also the fans. We understand. We know all these songs. We all remember where we were when we heard “The Black Parade” for the first time. We all have an opinion on Story Of The Year. Gotta see I Prevail. Fucking Thursday is playing. Pierce the veil hasn’t toured in 5 years. Atreyu is going to crush. BMTH is going to murder. Jimmy Eat World is going to save us. Paramour AND Avril??????

We will melt your face tomorrow.