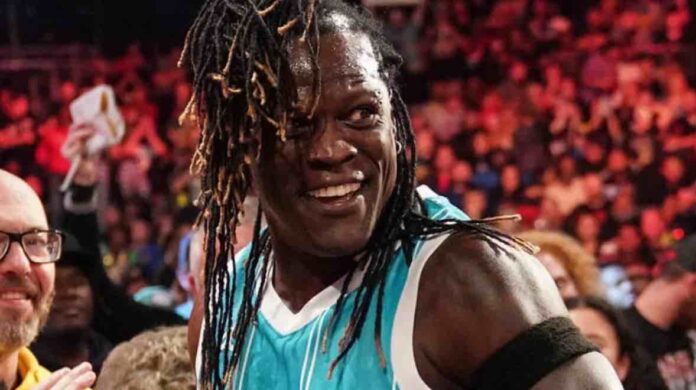 WWE star, R-Truth has released a new song that has been going viral in the wrestling world.

Known by many in the world of WWE, R Truth has been a major success not just with his in-ring action, but with his abilities in music as well. In fact, Truth raps his own theme song as he comes down to the ring on a weekly basis when he is televised. Check out his new song below.

I was invited to Raw in Dallas, Texas to check out the action for their very special Halloween episode.

The night opened with WWE Main Event. The event was two matches deep as we saw Dana Brooke and Kiana James open the show. Kiana James would ultimately win the match, which seemed surprising to those in the crowd, but her and Dana would put on a great match.

The next match was slated to be R Truth and Shelton Benjamin vs Von Wagner and Duke Hudson. The match was filled with lots of incredible action. R Truth came out to go against his opponents, Von Wagner and Duke Hudson and said that he would be alone that night as his would be partner, Shelton Benjamin was not feeling confident. R-Truth then thanked John Cena (whom he looks up to) for giving him the courage to do this match one vs two. R-Truth hit a lot of great spots. As the match rolled on, we see Shelton come in and help out Truth. Shelton Benjamin has always been such a great star who never got the push that they truly deserve. Shelton took a dive from the ring to the outside and just made it look so fluent.

R-Truth and Shelton would win the match.

After a short break, WWE Raw would open with the focal point being on Brock Lesnar and Bobby Lashley. Brock would show up in the ring and really pander to the Texas crowd, which the crowd loved. Bobby Lashley would be on the screen as the two were supposed to have a debate side by side – but Brock would be in the ring instead and call Lashley to the ring. Lashley would come out and without hesitation, Brock would charge him which caused the whole locker room to come out to stop the two. Triple H also came out to stop the fight. The fight would eventually cool off. Unfortunately, this would be the only time we would see the two for the night. That said, this was the highlight of the show and it came to us within the first five minutes.

The next highlight would come in a promo of Roman Reigns who would talk about his upcoming Logan Paul match. Texas loved Roman, so it was hard to see him as a heel in this light. Roman’s promo was interrupted by the Miz, who we would see multiple times through the show. Miz would tell Roman a “secret” about Logan Paul and how to defeat him, but ultimately, Roman would punch Miz in the jaw, which would cause Miz’ jaw to be crooked all night including his match with Mustafa Ali who would joke that while everything was “bigger in Texas,” it did not include Miz’ balls.

Matt Riddle and Otis had a really fun match in a Halloween street fight match. The two would use candy corn colored kendo sticks, pumpkins, candy, toy skeletons, and candy dishes to their advantage along with some tables here and there. Riddle would take this one.

Bray Wyatt would be featured throughout the night, but not in any QR code segments or promos. During commercial breaks, the live crowd would see Bray on the screens in the arena which would state that Bray would be on Smackdown. The only drawback to the night was not seeing Bray Wyatt. In my opinion, the Halloween episode would have been pumped up even more by having a character like Bray involved in the night in some capacity. Scheduling is always hard, but with Roman being there, I felt that Bray could have done the same for a really solid one-off for a Halloween episode of Raw. That said, we did get a run-in of Dexter Lumis in the Miz vs Mustafa Ali match, so it did help out the “Bray Wyatt factor”.

It should be said that Dominik Mysterio has become a highlight as well. The crowd really gave him a lot of heat, and it’s great to see him becoming his own star.

The last highlight of the night was for the match of Alexa Bliss and Asuka (featuring Bianca Belair) vs Iyo Sky and Dakota Kai (featuring Bayley). This would be the best match of the night for Raw. The action was back and forth and really drew you in. It was great to see Bliss and Asuka pick up the win here and to see the title change hands at a non-pay-per-view event. It made the night feel more special. Overall, a very solid show that really showcased how great the Triple H era is and how the women’s division are rightfully leading the charge for some of the best matches.