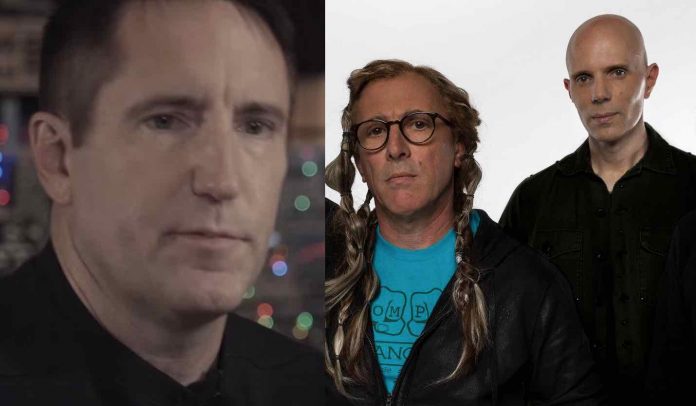 “On The Downward Spiral tour, I think it was 1994 or 1995, there was a part in the show where things got crazy and broken, and the screen came down. We had some time before the next song started, but not much, and there was a digital clock over there, and I could see the countdown. So I came out with a guitar to give to Trent, he is lying on the floor bleeding because he just destroyed a bunch of keyboards. I think he had knocked himself in the head.

I was like, ‘Alright, we’ve got 40 seconds, let’s go.’ Then it counted down to 20 seconds. I said, ’12 seconds, come on let’s go. Do you want me to play this, or what?’ Side story, I had always done all his sound checks if he was busy or something. I was kidding when I said that, he kind of moaned, ‘Yes.’ So I stepped out into the spotlight and started the song ‘Eraser’. I continued to play the rest of the song, and it was bizarre.

I had that moment where I could hear the gasp of the stage manager on the side, thinking did I go crazy and knock Trent out, and have delusions of grandeur and grab the guitar and go onstage. So I played the song that night, he pulled me back in to sing the vocal with him at the end. We kept doing it, he said, ‘Let’s keep doing that.’ We did that for the next week or so.”