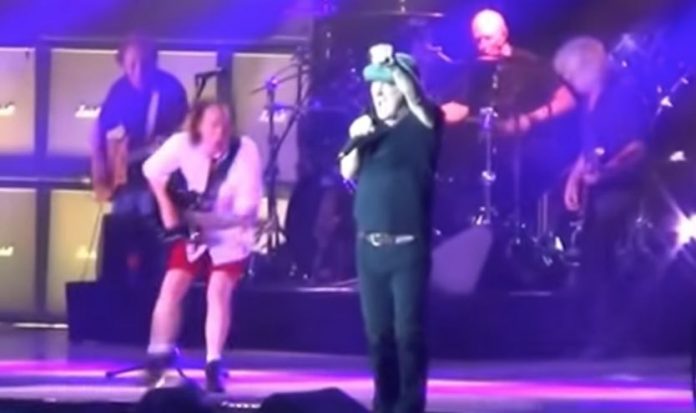 AC/DC drummer Chris Slade was photographed looking great, but a bit serious and sad, at a restaurant recently. Slade and his highly acclaimed Chris Slade Timeline are on tour. He said, “Preparing to drive in Europe…. See you at LET THERE BE ROCK FESTIVAL Viesalm Belgium⚡” An AC/DC icon was recently spotted partying with beautiful older women.

A fan named Gerry commented about his glasses, “They’re on upside down Chris!” Another fan named Scott chimed in, “Scott Clarke I just wanted the Grammy s again when you played with AC/DC Chris…you rocked the house.”

AC/DC are rumored to tour in 2020 with the surviving ‘Back in Black’ lineup of Brian Johnson, Angus Young, Phil Rudd, and Cliff Williams reuniting. AC/DC have always been secretive, and fans on the ACDCFans.net forum discussed the secretive departure of photographer Robert Ellis. An AC/DC employee hinted at a tour in California earlier this week.

MyCubiclePenguin said, “It seems that both this and another thread have turned into Robert Ellis talk. I know of his work, but am not familiar with really any of it nor his books.

After some research, was he the photographer of the band only during the Mutt era? Also, isn’t he a member of this forum?”

Rocco responded, “Yeah, he photographed ’em between 1979 and 1982. The first gig was at Wembley Stadium on the HTH tour where they opened for The Who. After the end of the Cannon & Bell tour they stopped working with him. He says he was never given a reason. But as we know, at the time the band was getting rid of a lot of people they had worked with: Peter Mensch, Ian Jeffery, Mutt Lang, Leber & Krebs.

Yeah, he also posts from time to time here. He photographed almost anybody who was big in the 70s and 80s. From AC/DC to Queen to Led Zeppelin to the Scorpions to Genesis ecc. He also took pics of Geordie in the early 70s. His books may not be cheap but they are worth every penny IMO. He’s also very active on FB and posts lots of pics. And he seems to be a very nice approachable and bloke. His pics are iconic.” A surprising young band claimed AC/DC would tour last week.