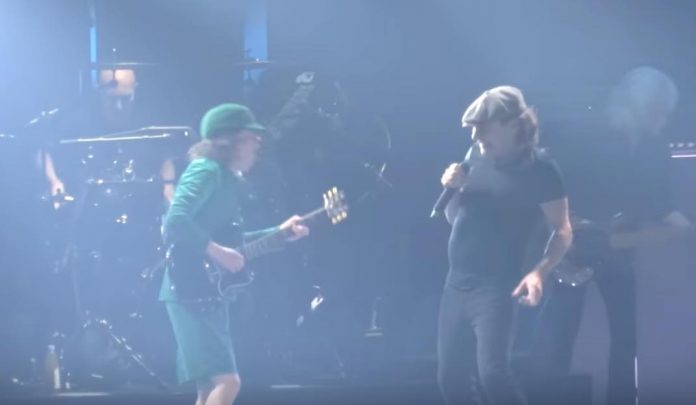 AC/DC drummer Chris Slade was recently interviewed by French media outlet – NRJ CORSE. Here, Slade reveals he knows people who use drugs, including legal substances, and discloses his mentally tough regime that has become a part of his routine before shows. An AC/DC member revealed when he would quit music yesterday. Alternative Nation transcribed Slade’s comments:

“Well each to their own because I have friends who do drugs of some kind every day. Even legal ones. I won’t even take a painkiller unless I’m really, really in pain, and really it’s a fear of drugs. So I’m not trying to be judgmental to anybody, just each to their own. I don’t drink alcohol on the day of a show. So if I work for five days, I’m in a lot of trouble.”

An AC/DC icon has shared a video from a recent concert show where his bandmate intentionally falls offstage into fans.

AC/DC are rumored to reunite with Brian Johnson, Cliff Williams, and Phil Rudd for a new album and tour, but fans on ACDCFans.net are getting restless.

Wholelottatobe wrote, “I think am done here, and pretty much done as a diehard as well. AC/DC is not really worth the attention.

AC/DC seriously don´t know their fans at all. Yes we want to celebrate HTH(maybe?). But why didn´t we celebrate LTBR or Powerage? Yes i get that those albums were not on the same levels of sales.

So I guess that LTBR and Powerage and those years writing, living and recording those albums didn´t mean a shit to the band or brand, not worth of a celebrate with the fans? I say celebrate them all or none. They have lost it, new album or not.”

AC/DC revealed a ‘Highway to Hell’ tour dates photo earlier this week. RajD07 posted, “Guess that Angus Young is quite happy not having to do interviews. And the management and record company do what’s best for the finances. Promoting the two most widely known records from their catalogue.

Sounds like the right strategy from that perspective. But on the other hand, a new release would risk to disappear in the shadow of next years celebration of BIB. That makes me doubt that it will be a new album release. Perhaps “only” one or two new songs in addition to the celebration.”