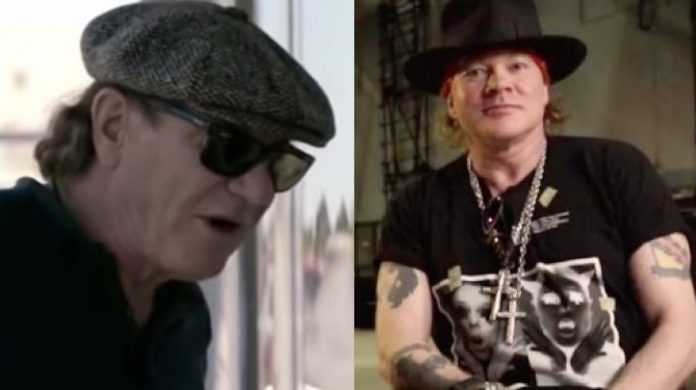 AC/DC singer Brian Johnson discussed his replacement Axl Rose and his GNR bandmates ending a Guns N’ Roses concert early in 1992, leading to a riot. Johnson told the story on his AXS TV series ‘A Life On The Road.’ An AC/DC icon being somewhat in denial after being dismissed by Angus Young was revealed yesterday.

“There was one night [Guns N’ Roses and Metallica] played a gig, where there was a big riot.”

He later added, “When Guns N’ Roses decided to pull their plug halfway through the set, it was too much for the people of Montreal.”

AC/DC fans recently discussed different ‘Fly On The Wall’ singles on ACDCFans.net. Janonen posted, “Where might one be able to listen to or acquire from the single mixes of Shake Your Foundations, Danger and / or others? I remember hearing SYF on Youtube years ago and being pleasantly suprised, but seem unable to find it now.”

Brian Johnson took a brutal shot at final AC/DC shows a couple days ago. nitroangus23 responded, “There are some CD versions of Who Made Who that mistakenly contain the original Fly On The Wall version of Shake Your Foundations, although it was corrected on the 2003 reissues. (At least mine is correct.) I had an older CD from 1994 I believe that had the wrong one on it.

Shake Your Foundations is the only song that is 100% confirmed remixed, although I recall several years ago a case being made for Danger.

I believe it may have been Crispyvenom (correct me if I am wrong anyone who remembers otherwise.) Who bought some of the singles and ripped them, and even uploaded them to YouTube at one point. We had some discussions here about them and I recall Danger being described as sounding better on the single mixes, although I can’t confirm myself,I can’t remember what the YouTube versions that were posted at the moment.” An AC/DC icon was stunned by a brutal Paul McCartney insult a few days ago.