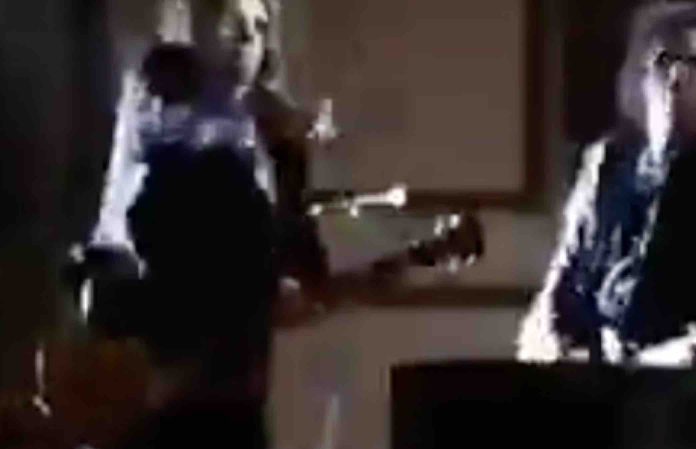 KISS should forget Cold Gin, how about some Cold Water?! Iconic KISS lead guitarist and co-founding member of the group, Ace Frehley was caught allegedly throwing a water bottle at a sound guy during the most recent KISS Kruisefest in Miami, Florida. KISS icon Paul Stanley revealed this creepy wife photo recently.

This came during alleged ‘hearing issues’ throughout the song ‘Rock Soldiers’. Frehley would allegedly also go off on the sound guy during this performance, saying “turn the guitar up you f***ing idiot.” KISS called out ‘ridiculous’ Ace Frehley reunion hopes earlier in the year.

KISSFaq user wrote about the incident: “In fairness, his guitar did sound a bit quiet on this video. No idea why the sound guy wouldn’t just pump it up a bit. That’s his job. Even if he’d given Ace more out of the foldback, but he seemed to flat out refuse him when Ace went over there. I’d be mad too! Not sure I’d abuse him over the mic, throw a water bottle at him then kick his mixing desk, but still…”

This KISS member revealed a creepy backside photo of his wife the other day. BC Witch stated: “Not being able to hear yourself is an extremely frustrating situation to be in at a gig. Mind you, with three guitar players on that small stage playing through Marshall stacks at high volume Ace’s monitor could have been on full and he still may not have been able to hear it over the sound coming out of the amps.”

Tito put: “This and the footage of “Breakout” are really sad. He obviously can’t hear shit but a pro should be able to deal with it for a song or two that you should know like the back of your hand. Not a good look when you’re clearly the weakest link on stage and you’re supposed to be the star.”