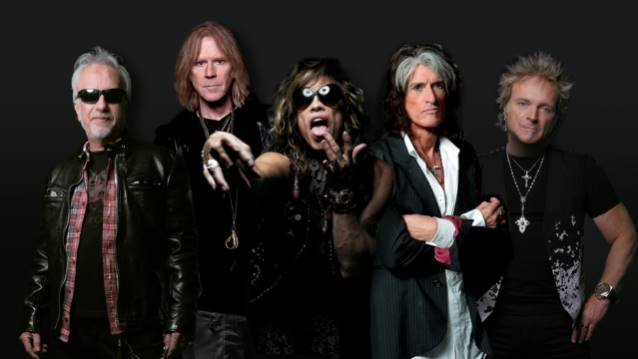 Aerosmith fans on the Aeroforce boards have pointed out that drummer Joey Kramer is still absent as the band have kicked off their fourth run of Las Vegas ‘Deuces Are Wild’ residency shows. Steven Tyler announced a couple of months ago that Kramer had broken his foot, and he even came onstage to say hello at a show during onstage introductions. Fans are speculating though on the Aeroforce boards about his health, despite video footage showing Kramer is likely being truthful.

seangod posted, “First show of Vegas run #4 Still NO Joey Kramer. I do feel like something is up. Almost two months seems like a long heal time for what was being called a “twisted,” ankle. I am sure JK has access to the best of the best when it comes to doctors… Idk… something is off…

Plus, why has the band not released a statement… They are marketing this Vegas thing as ’50 years,’ ‘same 5 guys.’ It really isn’t now. Now its 4/5. Fake News.”

Steven Tyler grabbed the leg of a famous actress a few days ago. pillis responded, “In my opinion, there was never an accident. Joey is simply struggling too much and he doesn’t want to play anymore. He loves the band but I bet he has a family to take care of, I don’t think he is happy to stay in crappy Vegas sweating like a pig, playing not his best and risking an heart attack.

I assume he quit the Vegas thing and no longer wants to play the remaining shows, at least not all of them. I wish the guys well but this year’s show was not really their best and judging by YT videos they have lost lots of steam since 2017’s tour. 2020 is a dead end imho.” Steven Tyler was accused of stealing a man’s girlfriend on The Howard Stern Show.