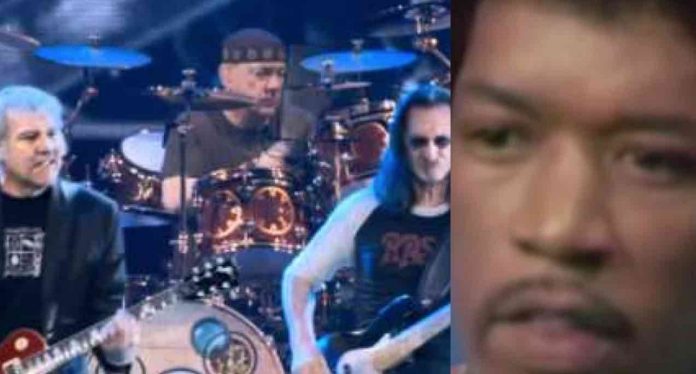 “A tone is really what it’s all about for, I think, every guitar player, and that kind of underscores the style of that guitarist. That connection is always there if you look at, say, David Gilmour, for example.

His tone, when you hear him play, it’s David Gilmour, you know right away. And Hendrix was the same way, Jimmy Page was the same way, and you know, although he had many different sounds, his tone was always very recognizable.”

Geddy Lee revealed surprising money Rush were paid in a new interview. Lifeson also revealed what makes for a great musician, “Passion, first of all, I think. Dedication, intelligence – I think you have to be smart about what you do – perseverance, you got to be willing to give up a lot of stuff and struggle, and maybe not get to where you want to go. But I think essentially if you have the passion, that will serve you the best. You’ll always be happy in your heart for what you do.”

A gross Geddy Lee eating photo was recently uploaded. Rush recently posted on their social media, “Austin, Texas April 23, 2013 on Clockwork Angels tour, first show post Rock Hall induction — ‘Of all the emotions surrounding our induction into the RRHOF back in 2013, the one I expected the least was comic relief — yet when I walked out onstage at the very first show after that momentous day the sight of hundreds of signs being held aloft with the words Blah Blah Blah had us all grinning widely and laughing…it was a beautiful thing…’- Geddy Lee.”