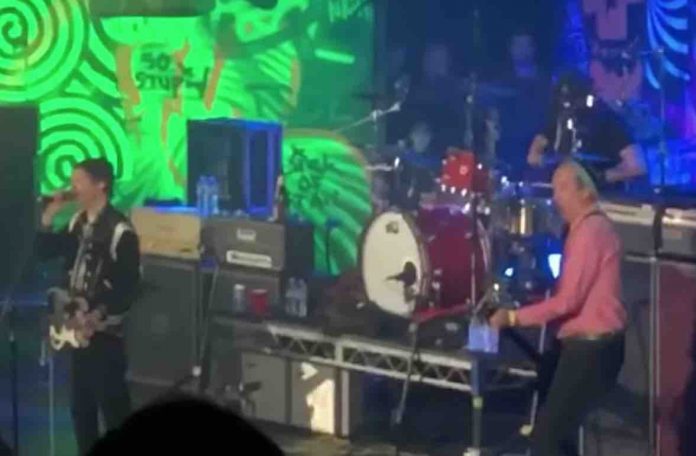 Nirvana reunited on Saturday night at the Hollywood Palladium in Los Angeles for the first time in 2020, the followup to their 2018 headlining Cal Jam festival performance. The ticket prices were expensive for the charity show. Beck, St. Vincent, and Dave Grohl’s daughter Violet served as guest singers, and Beck messed up the beginning of “In Bloom” by beginning to sing too early, as seen in a video.

Max Vicious commented on YouTube, “Beck messed up the beginning of In Bloom.” Vinyl Villains added, “He sure did. But I like when he realized it and had to try and save it. He seemed nervous. I mean Beck nervous to sing in public (can you believe it?!) But then I figured well yeah he loved this band.”

Tony D said, “Yeah he is a nervous guy. Even messes up his own lyrics occasionally.” Mike W wrote, “Look I know the singer is trying but damn come on. Kurt had more emotion when singing.”

Afro J chimed in, “Its very nostalgic, nice to see old friends playing together again 🙂 Kurt is irreplaceable though the Heart Shaped Box cover was brilliant!”

Rümeysa SELÇUK shot back, “She’s not that into her dad’s stuff. Maybe she dislikes the music or doesn’t want to be labelled as Cobain’s daughter, cause she is a decent independent artist already, I don’t know.

You can probably guess what would it be like, to have an amazing artist and a human being so many people have been idolizing for years as a dad and never had a chance to meet him and spend time with him. It’s too much to carry. So, she prefers to stay away from all of this and refuses to get attention by using her dead father’s legacy. Even though I wouldn’t consider it as a try to get attention, she probably thinks that way.” Dave Grohl teased a new song a few days ago.