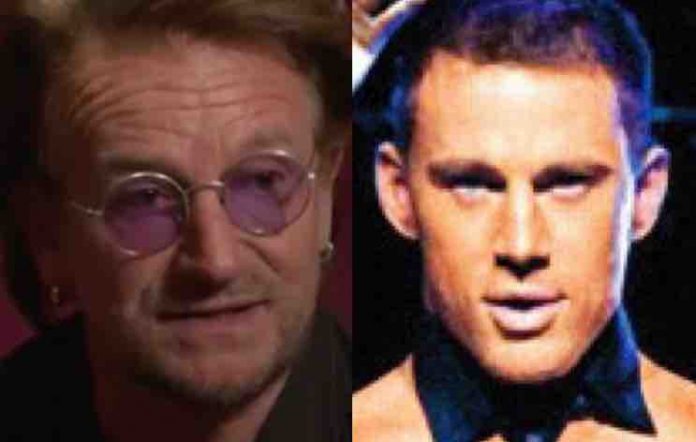 U2 singer Bono‘s daughter Eve recently posted a photo of herself in bed with a cut out of actor Channing Tatum. A creepy Bono and Britney Spears photo was just revealed.

Eve wrote, “To celebrate my first Instagram post, here is a still from a deleted scene of The Knick, S2, starring my dear friend @channingtatum. So sad this storyline never made it on the show, Channing’s a real talent. #theknick.”

ToRonToRon recently posted on ATU2.com about the new ‘Experience: Live in Berlin’ release, “WOOHOO!!! I’ve been waiting so long for this. Not thrilled that it’s only 75 minutes, but I’m hopeful that the home release will have the whole show. I’m also really hoping that it comes to HBO Canada. What a way to ring in the new year!

Now, can we get that Joshua Tree 2017 video already!!! I heard it was almost done at the beginning of 2019. I’m kind of assuming they’re just going to wait until the end of this Joshua Tree 2019 tour to throw in one or two bonus tracks from this leg of the tour on the Blu-ray. Also, I’m sure some fan reactions from Australia, Japan, India, etc.. So hopefully it also shows up in the first half of 2020.

I love all these concert videos. By far they’re the DVD’s/Blu-Rays in my collection, amongst all other movies, etc., that I watch the most. Anyone else as pumped as I am?”

Kevtn43 responded, “I’m super excited about this hopefully it will air here the states soon as well, as far as the 75 minutes that’s just for tv I read that there is 2 versions for this special a hour and one that is 75 but the dvd blue ray will have the entire show, plus I’m thinking that they will have the videos from SOE album as well.”

Billy Rhythm wrote, “too much chatter from Bono plus poor song selection… they could’ve chosen either ‘Vertigo’ or ‘Elevation’ but not both… same for ‘You’re The Best Thing About Me’ and ‘Summer of Love’… choosing between these and cutting out Bono’s rambling would’ve made way for something more diverse and interesting… people go on about the ‘i+e’ “narrative” but truth be known there is no “narrative” here outside of which only the ‘narrator’ himself can relate to… if they’re so bored with playing ‘New Year’s Day’ that they have to mangle it like this then just drop it all together and play something else that you’re not sick of… easily their most forgettable concert document…” Bono ‘looked like a woman’ in a newly uploaded photo.